"We understand the situation in Ethiopia very well. Ethiopia has the history, acumen and capacity to solve this problem," he said.

Mekonnen thanked China for its "strong support regarding the action that the government is taking on those that attacked its sovereignty."

The visit comes as the Head of the United Nations Office for the Coordination of Humanitarian Affairs (OCHA), Martin Griffiths said the situation in Ethiopia, where government forces have been battling fighters from the Tigray region, is the “most worrying” in terms of “urgent, immediate need” and said he was “very worried” about a possible siege by fighters on the capital, Addis Ababa.

Footage of Ethiopia's prime minister Abiy Ahmed walking with and speaking to military commanders as patriotic music played in the background, was distributed by the prime minister's office to local media.

Tens of thousands of people have been killed in the war that erupted in November 2020 between Ethiopian troops and the Tigray forces who had long dominated the national government before Ahmed took office in 2018.

Last month, the prime minister announced he would travel to the battlefront to direct the army.

Foreign media have been barred from Tigray for much of the war, with communications links severed.

Since Prime Minister Abiy Ahmed sent troops into the northern Tigray region more than a year ago. It estimated that 26 million people there need humanitarian aid, including 400,000 people on the brink of famine.

“A new convoy is moving, so the humanitarian aid is effectively restarted, probably not as much as we would like. But that is a good signal and the UN flights between Mekele and Addis have been re-established.”

He said the resumption of aid delivery to Tigray's capital city indicated “a small hint of hope” that “might facilitate a future more positive attitude for dialogue.”

At Guterres's side, African Union Commission Chairperson Moussa Faki Mahamat stressed the need for a cease-fire.

“Unfortunately, the fighting on the ground continues,” he said.

Guterres urged the warring sides to “put an end to the fight” and “start talking.”

The conflict broke out in November 2020 when Prime Minister Abiy Ahmed sent troops into the northernmost Tigray region to topple the Tigray People's Liberation Front (TPLF) -- a move he said came in response to rebel attacks on army camps.

The rebels mounted a comeback, recapturing most of Tigray by June before expanding into the neighbouring regions of Amhara and Afar.

The conflict took a sharp turn around a month ago, when the TPLF claimed to have captured strategic towns on a key highway to the capital.

In nearly 13 months, the fighting has killed thousands, displaced more than two million and driven hundreds of thousands into famine-like conditions, according to United Nations estimates. 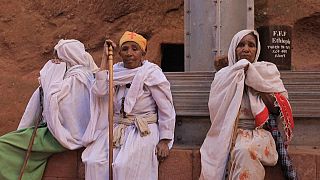