"We can use the bottles and put them to good use": to raise awareness of the problem of plastic waste and marine pollution, an NGO in Cameroon has collected bottles washed up in Kribi, a seaside town in the south of the country, to sculpt a 12-meter long plastic whale.

It is impossible to take a step without coming across a plastic bottle on Ngoye beach, the most popular with tourists who flock there every weekend.

About 20 young volunteers, Cameroonians and foreigners, walk along the coast, for about 2 km, to clear this sandy beach of abandoned soft drink and water bottles.

The plastic bottles collected on this Atlantic Ocean shoreline are being used to sculpt a giant whale, an initiative of an African marine mammal conservation organization (Ammco). "These plastic bottles should not pollute the environment but be recycled, in particular to make artistic works", explains Eddy Nnanga, coordinator of Ammco.

On the beach, a welder is assembling irons to form the skeleton of a whale, 12 meters long. Several volunteers join him, gradually covering this sculpture with plastic bottles. The whale required 2,000 bottles and more than five hours of collection by volunteers, according to Nnanga.

"It is an artistic work to make people, fishermen, communities understand that there are whales in Cameroon, in Kribi, and that we must do everything to protect them because they have an important role in the oceans," he said.

Cameroon, a Central African country with a population of about 27 million, produces some 6 million tons of waste each year, including 600,000 tons of plastic. And only 20% is recycled, some of it ending up in the waters surrounding the country.

Raoul Tuekam is hard at work. This teacher-researcher at the University of Bamenda, in the English-speaking northwest, grabs a plastic bottle before throwing it into a bag. Present in Kribi for a conference on marine pollution, he participates in this operation because "the pollution due to plastic waste is enormous". "We are also trying to raise awareness among the population to tell them that this waste is a threat to the sea," he explains, especially at the "level of fish production which is declining. 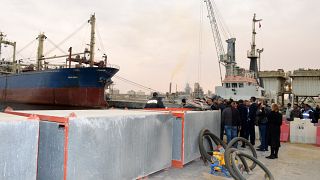