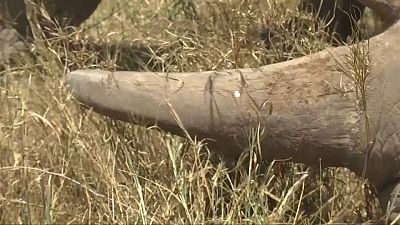 The world's first virtual rhino horn has been auctioned in South Africa.

The virtual object is an exact replica of a real horn kept in a safe place.

The objective is to fund conservation efforts for this endangered species.

"We have rhinos on the reserve, they are protected and given space to be breed and we are doubling our population every four years or so. So it's a really important conservation project. But it costs a fortune - if you don't want to get poached you have to spend a ton in terms of manpower and security infrastructure, and this a way to help us fund that. There aren't many ways to fund that, historically those of us in the private conservation space have simply paid out of our own pockets", said Derek Lewitton, rhino conservation farmer, Black Rock Rhino Farm.

The virtual horn was sold to a local businessman for just under $7,000.00.

"If worst-case scenario, if rhinos go into complete disarray then I would still own a rhino horn, because the NFT is a token of the physical rhino horn. So I am relatively privileged and honoured and I actually made my mind up before the time, before the auction started that that's the one I wanted", explained Charl Jacobs, the new owner of the virtual horn.

Non-fungible tokens (NFTs) are certificates of authenticity associated with a virtual object that are theoretically unique and non-piratable. Many works of art are being sold this way now.

Proceeds from the auction will now revert to the Black Rock Conservation farm in Limpopo, which has seen significant growth in its rhino population in the last decade.