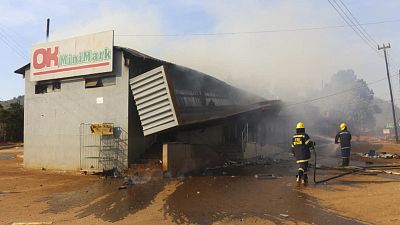 Human Rights Watch on Tuesday called for an independent probe into the deadly crackdown on protests that rocked Eswatini, Africa's last absolute monarchy, in June.

The call came as South African President Cyril Ramaphosa was due to visit Eswatini on Tuesday for talks with King Mswati III on "political and security developments" in the kingdom, Pretoria said.

Hundreds of people have been injured since demonstrations first erupted in June, in the worst unrest to hit the usually peaceful former British colony.

Forty-six people were killed in June while at least 245 others suffered gun-shot wounds, according to HRW citing a recent report by a local rights group.

Surviving victims said they were shot by the military, added the HRW.

"The Eswatini government should urgently agree to an independent, international investigation into all of the killings and any other human rights violations resulting from excessive use of force," Dewa Mavhinga, the HRW's Southern Africa director said.

The UN human rights office had in July pointed to allegations of "disproportionate and unnecessary use of force, harassment and intimidation" by security forces sent in to quell the June protests.

The king of the country formerly known as Swaziland, told mediators sent by Ramaphosa last month that he was open to dialogue with the pro-democracy activists.