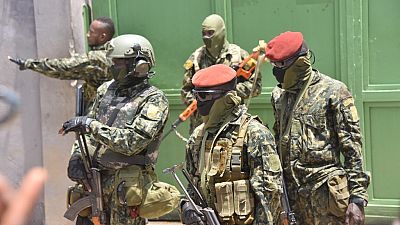 Guinea's Colonel Mamady Doumbouya, who seized power in a coup in the West African nation in September, has announced that he is placing nearly 1,000 soldiers into retirement.

In a speech on Sunday evening, the strongman said the retirements will come into force on Monday and "must in no way be considered as a punishment".

"After having loyally served Guinea, nearly a thousand military personnel will enjoy their right to a deserved retirement," Doumbouya, 37, said.

It is not clear which members of the military are being forced into retirement, nor why the decision was taken.

However, the announcement follows the forced retirement of 44 generals and admirals on October 12, in an apparent purge of the military top brass.

Former special-forces commander Doumbouya rose to power in Guinea on September 5 in a coup that ousted elected president Alpha Conde after months of brewing discontent against his government.

Doumbouya defied broad condemnation of the putsch and was sworn in as interim president on October 1.

He has nevertheless promised to restore civilian rule after a transition period of unspecified length, and to unite the politically fractious nation of 13 million people.

The strongman also appointed civilian Mohamed Beavogui as his interim prime minister last month, and pledged to revise the constitution and fight corruption.

On Sunday, Doumbouya stressed the need for transparency in the way resources are allocated to troops.

"It must be understood that subordinates who are not treated well by the hierarchy are generally inclined to defy authority," the coup leader said.