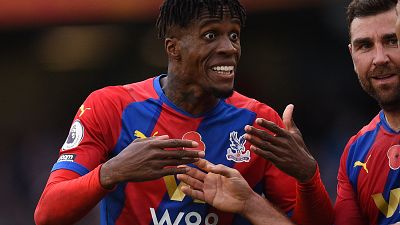 "I do not mind abuse because nowadays it comes with doing the job, even though it is not an excuse. I will always be black and proud," said Zaha.

Tunisia captain Wahbi Khazri claimed an amazing goal for French Ligue 1 outfit Saint-Etienne in a 1-1 draw at Metz, finding the net with a 68-metre shot.

Here, AFP Sport highlights Africans who starred in the major European leagues at the weekend.

He was a key figure for Palace, firing his side in front after just six minutes at the Etihad Stadium. City defender Aymeric Laporte was dispossessed by Conor Gallagher, who sent his team-mate clear and Zaha beat Ederson with a well-struck shot into the corner. In first-half stoppage time, Laporte saw red for hauling down Zaha.

The 23-year-old Zambian's first Premier League goal is destined to be enjoyed by generations of Brighton fans. Four minutes before half-time, with the visitors 2-0 down, his arcing shot from 25 yards went over Liverpool 'keeper Alisson's outstretched hand but under the crossbar. After a 2-2 draw, an elated Mwepu tweeted: "Am just a boy from Zambia who had a dream of playing and scoring at Anfield and today the dream has been fulfilled. Glad to get my first Premier League goal."

On a day when Egypt's Mohamed Salah failed to score for the first time since August, it was Senegal star Mane who doubled Liverpool's lead at home to Brighton when he headed in an Alex Oxlade-Chamberlain cross.

The 25-year-old Ghana defensive midfielder has spent his entire club career in Spain. On Sunday, he gave Mallorca the lead at Cadiz after half an hour for his second goal this season in 12 appearances. But his team had to settle for a third successive draw when Alvaro Negredo converted a penalty in the third minute of stoppage time.

The Ivory Coast midfielder sent Portugal goalkeeper Rui Patricio the wrong way from a 57th-minute penalty to double the lead of second-placed AC Milan in a 2-1 Serie A victory at Roma. Kessie scored his second goal of the season after VAR confirmed Swede Zlatan Ibrahimovic had been fouled by Brazilian defender Roger Ibanez.

The Tunisian scored an outrageous goal from his own half in Saint-Etienne's 1-1 draw at Metz. After picking the ball up in the penalty area, Khazri dribbled upfield and took aim from 68 metres, catching the goalkeeper well off his line as the ball sailed over the head of 2019 Africa Cup of Nations winner Alexandre Oukidja.

The Algeria forward scored both goals as Nice came from behind to beat Angers 2-1 and go second in Ligue 1. Delort's first came via a deflection that sent the ball looping over the goalkeeper, but his second was a brilliant 20-metre volley in added time. His international future is in question, however, after national team coach Djamel Belmadi said this month he is "no longer selectable" after prioritising club over country.