In Cameroon's economic capital, Douala, a new start-up specialising in recycling plastic waste promises a solution to an old problem.

The sewage system and drains are often blocked by discarded plastic waste that is now being collected in order to turn it into diesel fuel.

" We canvas the streets of Douala collecting plastic waste. In general, this plastic waste is discarded by the population and also by companies. It is our way of contributing to a healthy and clean environment in order to preserve it for future generations", claims Patrick Kuate Deffo, operations manager of Isotech.

Once the waste has been collected, it is then transported to the processing unit.

After sorting and shredding, the waste is pelleted and placed in a pyrolysis oven along with other materials.

"The plastic waste is sorted and we recover more or less clean waste that we crush to transform it into granules. After transforming it into granules we put it into a pyrolysis oven. After 30 to 40 minutes inside, with a temperature that reaches up to 600 degrees, the plastic is melted and recovered from the turbines that we have made from the scrap to be able to recover the liquid" explains Isotech's general manager, Walter Djatsa.

The system produces 15 litres of fuel per day in 7 working hours. The resulting fuel is used to run the incinerator.

"Our incinerator uses fuel. Instead of going to the petrol station to buy fuel, we have made our own fuel from our pyrolysis oven and recycled plastic, which we use in the incinerator to be able to incinerate medical waste which is very dangerous", says Djatsa.

The production remains modest but for the public authorities who support this initiative it is a way of fighting to protect the environment.

"As you can see, for a city like Douala, we are very close to the sea and this means we will have less and less bottles that will go into the ocean and that will turn into micro plastics that are very often consumed by seedlings and fish and that further pollute the ocean'', argues government official William Lemnuy.

However, some questions remain about the impact on the atmosphere of this fuel made from plastic waste. 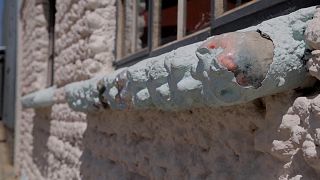