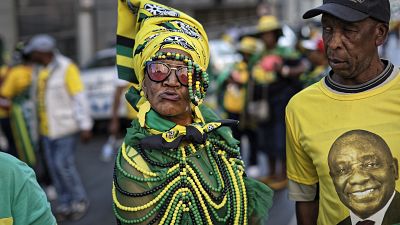 It is the final stretch before South Africa turns out to vote in local elections next Monday, and the African National Congress (ANC) is struggling with a harsh reality.

This week, its former leader ex-president Jacob Zuma appeared in court -- again -- for one of his many corruption scandals.

A new wave of blackouts rolled across the country, interrupting the ANC's own campaigning and reminding voters of the party's dismal economic record.

But that was just the latest chunk of bad news for the once-serene ruling party.

In past months, unemployment has hit a record 34.4 percent. In July, political infighting spiralled into looting and social unrest that left 354 dead and hammered the economy.

The ANC has governed South Africa since the advent of democracy 27 years ago, but polls show that next week, a majority of voters could turn against them for the first time.

The ANC knows the stakes could not be higher.

President Cyril Ramaphosa and other leaders have hit the campaign trail, even touring smaller towns to stump for local councillors.

"This time we want municipalities that would work for our communities," Ramaphosa told crowds during a pitstop in the central region of Mangaung.

"And we don't need thieves," he said, conveying the message that he would cleanse the ANC's reputation for sleaze.

His deputy, David Mabuza, has admitted the power cuts are hurting the drive for votes "because people are complaining about electricity."

Chaos within the ANC has dampened its fundraising and made it miss deadlines to register candidates, forcing it to seek extensions for applications.

A poor showing Monday could deepen rivalries within the party, compromising Ramaphosa's reform drives. The ANC has already tossed out two presidents mid-term when their leadership fell flat.

In the last local elections in 2016, the ANC won just under 54 percent of the vote -- its worst showing ever -- and lost control of major cities like Johannesburg and Pretoria for the first time.

The opposition is split among several parties, creating coalition governments in cities for the first time.

The largest opposition party, the Democratic Alliance, is seen as party for whites but formed coalitions with the Economic Freedom Fighters (EFF), who have advocated for radical reforms.

These marriages of convenience have often proved unstable, creating local governments more focused on internal wrangling than on basic services.

Disenchantment with the mainstream parties is reflected by the record number of independents contesting the polls.

Of the 60,000 candidates, more than 1,700 are independents -- some of them disaffected members of the main parties now running against their former colleagues.

Political observers will be scrutinising their performance to see whether it presages further crumbling of support for the big parties ahead of general elections in 2024.

Despite this backdrop of change, many voters seem uninterested -- a third of potential voters have not even bothered to register.

"To be honest, I had no idea it was that time of the year," said Siphelele Mtshali, a 24-year-old soccer coach in Johannesburg.

"We've been voting for a while now, and we've been expecting change, and there hasn't been any."

"It doesn’t matter who you vote for," said Wahieba Louw, an 18-year-old Johannesburg student who said she had not registered for what will be her first major election.

"Whether you vote ANC or DA, you're still going to be stuck in the situation that you're in," she said.

"You can't see what they're doing to make South Africa better."