**Tuyisenge Olivier is one of the very few acts in Rwanda who a few years ago took a bold step and embarked on booking for studio time to record his poems. **

Born in the early 90s, Tuyisenge learned creative arts and how to compose songs and poems, he later on dropped out of high school to focus more on his art – related passion.

"I decided to pursue traditional poetry because that is what I grew up on, I grew up in family that really love everything traditional and that is interested in tradition. Also, my family members have made a living out of traditional art."

Olivier managed to saved up to Rwf4 million to start the recording studio project which he says will focus on traditional songs, he says that the studio’s future prospects include raising the talents of young disabled figures that are mostly left out by the society.

"I have different talented artists here that can be on the spotlight later. When you do traditional art, you are unique, here and outside the country. In the next 10 years , this traditional music will just hold the Rwanda flag abroad. "

One of The biggest challenges most Rwandan poets and traditional artists face is the lack of a strong support system, they urge the government to integrate poetry and traditional talents into the showbiz initiatives it supports. 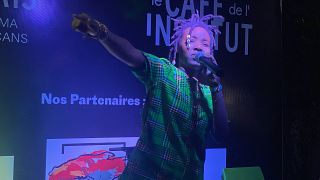