The cast and director of Bob Marley musical "Get Up, Stand Up!" are thrilled their show is finally going ahead.

The show, which celebrates the Jamaican music icon - from his life of poverty to becoming an international star - has been six years in the making.

Directed by Clint Dyer, it stars Arinze Kene as the reggae star, alongside Gabrielle Brooks as Rita Marley and Shanay Holmes as Cindy Breakspeare.

Kene, who has been attached to the project since the start, says "it feels absolutely dreamy and also a little bit emotional," to be back on stage, following a hiatus due to the pandemic.

"The stage is one of my homes," he says. "And to kind of have to put it on pause for a year and a half is, it's hard to do, you know? So, it's good and audiences as well are loving it. We've had packed houses every night and it's quite a thing. Live performance is irreplaceable."

Brooks says the audience reaction so far has been "overwhelming in the most magical way."

"Honestly, it's been gorgeous every single night and long made the joy continue," she says.

Thanks to Marley's universal appeal, Dyer says the show is attracting a diverse audience.

"The mix has been incredible," he says. "You think it's just going to be people of color and then a whole night, it's working-class white people that have come along and loving it. And then the next night, it's completely mixed. And so, we're really enjoying the fruits of somebody whose music was able to speak to everybody."

"We're trying to delve into his spirit and what really made him tick and why and how he changed and revolutionized and created and led a whole movement, you know, musically, spiritually," adds Dyer.

The stars of the show say Marley's messages of peace, love and unity are as important today as they've ever been.

"It's relevant because his music is needed now," says Holmes. "We had the Black Lives Matter movement last year that just took over the world it felt like. And when you come here and watch this show, you cannot leave without really understanding there's so much more work to be done. And this was the work he started, you know, in the '70s, '80s. So yeah, it's incredibly, incredibly relevant."

"Get Up, Stand Up!" began previews at the Lyric Theatre on October 1. Opening night is set for October 20. 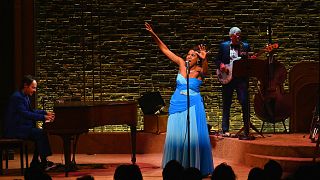