Speaking to reporters alongside Kenyatta shortly before their meeting was to begin, Biden said the two would also discuss "transparency" in international and domestic financial systems.

The East African leader finds himself facing scrutiny over revelations that he and his family stashed millions of dollars in hidden offshore accounts. Kenyatta is one of more than 330 current and former politicians identified as beneficiaries of secret accounts revealed in recent reports known as the Pandora Papers.

He and his relatives have some $30 million in offshore holdings, according to reporting by The International Consortium of Investigative Journalists. The consortium obtained millions of leaked documents that detail the hidden wealth of prominent world leaders, politicians, corporate executives and celebrities. Kenyatta has denied wrongdoing.

Biden did not directly address the Pandora Papers revelations in the brief appearance with Kenyatta at the start of the Oval Office meeting.

But Biden planned to address the "elephant in the room" with Kenyatta and senior Kenyan officials in private, according to a senior administration official who was not authorized to publicly discuss the matter and spoke on the condition of anonymity.

For his part, Kenyatta thanked Biden for the additional doses of the COVID vaccine, noting that as a continent, Africa is "lagging well behind the rest of the world in terms of being able to vaccinate" its population.

Only nine African countries met the World Health Organization's goal of vaccinating at least 10% of the population by the end of September.

The new donations, expected to be delivered in the coming weeks, are in addition to the 50 million doses already donated to the African Union by the U.S. A vaccine acquisition group backed by the African Union has already procured 400 million J&J doses. 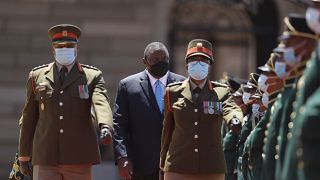