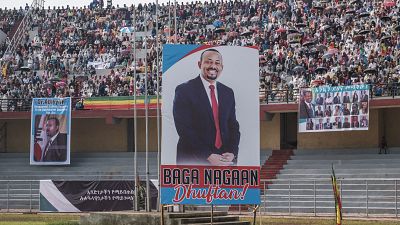 At the first sound of gunfire, Lelise Abdissa leapt into a ditch for cover, only to be crushed by other panicked revellers as Ethiopian troops clashed with protesters during a religious festival five years ago.

She awoke hours later in a hospital with a broken arm, but she was lucky: Scores of people died in the October 2016 stampede that marred the celebration of Irreecha, a thanksgiving festival for Ethiopia's largest ethnic group, the Oromos.

But with Abiy now set to be sworn in for a new five-year term, the enthusiasm surrounding his appointment has long faded for some Oromos.

This weekend they made their frustrations known during two days of Irreecha festivities: on Saturday in Addis Ababa and on Sunday in the town of Bishoftu, traditionally home to the largest Irreecha gatherings.

Chanting "Down, down Abiy", they complained about the same issues that drove them into the streets in 2016: killings of Oromo civilians, mass arrests of Oromo youths and the incarceration of Oromo opposition politicians.

"Unfortunately we are back to square zero," Eyasped Tesfaye, a prominent Oromo activist and government critic, told AFP.

"I don't think there has been any change," she said.

Irreecha marks the end of the rains and the start of the harvest season.

For more than a century, hundreds of thousands of Oromos have descended on Bishoftu, southeast of Addis Ababa, for the holiday.

In 2019, one year after he took office, Abiy allowed a separate Irreecha celebration to take place for the first time in Addis Ababa -- a move that risked exacerbating ethnic tensions since prominent Oromo nationalists claim the capital rightfully belongs to their people.

Yet holding two events has now become the norm.

This year in Addis Ababa, Oromo traditional leaders led crowds towards pools of water in the city centre, where they dipped flowers and sprayed themselves in a gesture symbolising gratitude and renewal.

But some young men opted for an overtly political message, crossing their arms above their heads to signal defiance and calling for the fall of Abiy's ruling Prosperity Party.

Others demanded justice for Hachalu Hundessa, an Oromo pop singer gunned down in 2020, whose death sparked protests and clashes that left 160 dead. The killing remains unsolved.

Still more urged the release of Oromo opposition leaders Jawar Mohammed and Bekele Gerba, who were detained during the mayhem that followed Hachalu's death.

On Sunday, authorities took several measures to contain the crowds in Bishoftu, blocking most traffic from Addis Ababa and temporarily cutting electricity, phone and internet services.

But despite a heavy military presence, they were only somewhat successful.

Some even waved the OLA's flag.

Festival-goer Lemi Solomon told AFP the protests would have been bigger if many young people had not already run off to join "the armed struggle" with the OLA.

"The people you see here are celebrating even though there is suppression," he said.

The tensions surrounding Irreecha come at a sensitive time for Abiy, who is set to be sworn in on Monday for a new five-year term.

The Prosperity Party scored a landslide win in June elections, an outcome federal officials have framed as an endorsement of Abiy's political and economic reform agenda.

But in Oromia, opposition parties including the OLF boycotted the polls, complaining their candidates had been arrested and their offices vandalised.

More than 20 percent of constituencies nationwide -- many of them in Oromia -- were contested only by the Prosperity Party.

"Even though I have a full right to participate in the election and vote, I don't believe that right was respected because the election did not happen by democratic means," student Gutu Sori, who attended Irreecha in Bishoftu, told AFP.

"I do not have hope from this government because it is led by a strongman."

Abiy, for his part, tried to use this year's Irreecha to mobilise public sentiment against the Tigray People's Liberation Front (TPLF), once the main target of Oromos' ire, and now locked in a brutal war against government forces in Ethiopia's north.

"This clique shouldn't be allowed to live with us," Abiy said.

"If this traitorous force which wants to extinguish us and leave us with nothing... isn't removed, then this won't be a bright year for Ethiopia."