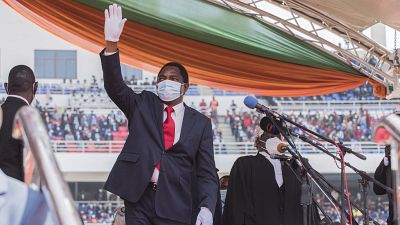 On his arrival at the National Assembly, Hichilema received a 21-gun salute and inspected the guard of honour before entering hand-in-hand with his wife, Mutinta.

Dozens of supporters, clad in red, sang his campaign songs.

"We have a zero-tolerance policy on corruption in all its forms," Hichilema said, speaking in a medical mask and white gloves before lawmakers.

"There will be no sacred cows in the fight," he added. "We will increase the benefits of being honest and the cost of being corrupt."

He also outlined an economic recovery plan to fix the impacts of unsustainable borrowing and mismanagement that caused copper-rich Zambia to default on its debt last year -- the first country in Africa to do so in the coronavirus era.

He beat his long-term rival Edgar Lungu in August 12 polls by a landslide of almost one million votes -- a victory hailed as a democratic milestone for opposition movements in Africa.

"We have indeed inherited an economy that is in dire straits and requires bold and decisive action," Hichilema said, vowing to boost key sectors like mining, agriculture and tourism.

He has vowed to secure a bailout deal with the International Monetary Fund -- a drawn-out negotiation process started under Lungu -- and to achieve economic growth of more than 10 percent within five years.