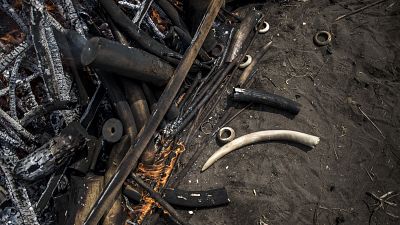 Illegal logging, charcoal production and poaching in and around Virunga National Park, the famed sanctuary of mountain gorillas in eastern DR Congo, are enriching armed groups in the troubled region, local NGOs say.

"The majority of armed groups active in North Kivu (province) have set up bases in and around the park," raking in hundreds of thousands of dollars (euros) each month, 38 environmental and human rights movements say.

They spell out the problem in a letter to the province's military governor, President Felix Tshisekedi and senior officials in Kinshasa and in Goma, North Kivu's capital.

Armed groups "illegally exploit various natural resources to finance themselves," from ivory trafficking and charcoal production to extorting local fishermen on Lake Edward, according to the letter released on Wednesday.

Fishing alone is estimated to provide the groups with income of least $100,000 a month, through "taxes" levied on the use of the canoes.

As for charcoal burning, "at least 40 trucks each carrying 150 sacks of lump charcoal enter the city of Goma every day," the letter says. At $10 per sack, the sums collected reach almost $1.7 million per month.

These funds add to income from kidnapping and other criminal activities, which the groups use to buy weapons and bribe officials, the letter adds.

The Congolese Institute for the Conservation of Nature (ICCN) said the letter "pinpoints a real problem" where armed groups directly feed off trafficking in natural resources.

The groups are urging North Kivu's government to "prohibit any commercial activity or illicit traffic involving the military, park wardens or members of their families" and to crack down on "intermediaries".

Situated on DR Congo's borders with Rwanda and Uganda, the 7,800-square-kilometre (3,000-square-mile) park is the oldest nature reserve in Africa and a sanctuary for rare species, including mountain gorillas, which are also present in neighbouring Rwanda and Uganda.

The haven has also been the theatre of clashes between gunmen and park rangers, of whom 21 have died in the past year.

More than 120 armed groups roam eastern Democratic Republic of Congo, many of them a legacy of regional wars some two decades ago, according to the Kivu Security Tracker (KST), a respected US-based monitor of violence in the region.