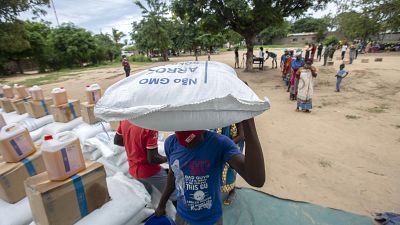 Mozambique was urged Wednesday to investigate fresh claims that women have been coerced into giving sex or money to receive food aid in regions hit by a four-year insurgency.

Local officials in the northern province of Cabo Delgado have made the demands of women who should be receiving food aid for free from international humanitarian programmes, said Zenaida Machado, a researcher for Human Rights Watch.

"This is very widespread. It's a common practice," she said, pointing to similarities from an investigation HRW conducted two years ago after a deadly cyclone hit a separate province.

She said that the exploitation "happens most at the community level".

Cabo Delgado has been ravaged by intense violence in recent years which has uprooted least 800,000 people from their homes, with more than 3,100 killed - half of them civilians, according to conflict tracking organisation ACLED.

Data collection has been difficult, with most victim unsure of how and where to report the abuses, but the Human Rights Watch report Wednesday backed findings earlier this week from an investigation by Mozambique's Centre for Investigative Journalism.

A national watchdog, the Centre for Public Integrity, reported similar claims in October last year. Local officials draw up lists of people displaced by the conflict. These lists determined who receives food aid.

"In exchange for including the displaced on the lists of beneficiaries, the local leaderships demand sexual favours from vulnerable women and girls" the report said.

"This takes place in a context where displaced people are fragile, particularly women and children who are more vulnerable," the centre's director Edson Cortez told AFP on Wednesday.

"The authorities should create channels where the perpetrators of these abuses are denounced."

An official from the provincial government told AFP via text that he had no knowledge or information about the reported abuses.

Machado said that Human Rights Watch had uncovered similar abuses two years ago in the aftermath of Cyclone Idai. The latest claims emerged during an investigation of other issues affecting displaced people, she added.

In March this year, insurgents swooped on the coastal town of Palma, killing dozens of people and triggering an exodus that included employees from the Total project, forcing the company to halt work on a $20-billion natural gas project.

Rwanda and southern African regional forces have since July deployed to support the Mozambican military in their battle against the insurgents.