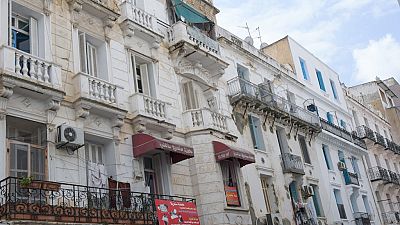 In the center of Tunis, many art deco or art nouveau buildings, typical of the modern city created during the French colonization, are crumbling for lack of renovation and facing the appetite of real estate developers.

These buildings of European architecture were built in the nineteenth and twentieth centuries at the gates of the medina, the old traditional Arab city, to form a "modern" city center adapted to the needs of industrialization. They were inhabited by settlers until their hasty departure after Tunisia's independence in 1956.

But 65 years later, many dilapidated buildings are threatened with destruction, for lack of a renovation strategy by the state, which has seized some of the buildings. At least 160 are at risk of collapse, according to the latest official census in 2019.

Some residents have made repairs that have distorted the architectural heritage while other abandoned buildings serve as landfills or squats. Finally, some buildings are threatened by real estate developers who try to get their hands on them to raze them and replace them with modern constructions.

"I've been resisting for a long time," says Imed Tahenti, the last inhabitant of a deserted building, located a stone's throw from the capital's main avenue, lined with Haussmann-style buildings. He denounces the pressure of a real estate intermediary who announced to the tenants that he had bought the building in the 1970s and now wants to evacuate the premises.

Imed Tahenti, a baker in his sixties, fears that the owner's objective is to demolish the building, which has never been maintained, in order to better develop the land with modern offices. And he regrets especially not having been informed of the sale of the property, recalling that the law made him, as a tenant since 1956, a potential priority buyer.

Whimsical volutes, high ceilings, earthenware and handmade tiles, spiral staircases: the building in question is a pearl of the Art Deco movement, born in the 1910s. Built by Italian and French architects and contractors, these buildings suffer from their association with French colonization and its exploitation.

But "we can not talk about the Arab city without mentioning at the same time the European city that is the center of Tunis, they are the two sides of the same heart" of the city, says the architect Dhouha Al-Jalasi. Europeans made up a large part of the Tunisian population at the beginning of the 20th century. And after independence, the 1857 Constitution allowed them to own land and build houses.

European neighborhoods thus developed in various cities, such as Tunis. However, many of the original owners eventually left the country for Europe, after the country's declaration of independence and in the midst of the Israeli-Arab conflict. According to official statistics released at the end of 2020, the number of foreign properties in Tunisia amounts to 12,305, of which 7,645 have been transferred to the Tunisian authorities under Franco-Tunisian real estate contracts.

The Association Bâtiments et souvenirs recently called for a "constructive strategy" to "preserve the historic architectural landscape. But these heritage advocates have little hope of getting things moving, at a time when the country is going through one of the most serious economic and political crises in its history.

Bertrand Ficini, deputy director of the French Development Agency (AFD) is no more optimistic. "Given the relatively low level of funding that we have been able to raise in recent years, heritage conservation, particularly in Europe, is not a priority for our partners," he laments.

At the end of 2020, the AFD still committed 12 million euros for a project to renovate old cities, including European neighborhoods. But the European city of Tunis remains threatened by a draft law on "ruined buildings to be destroyed", presented to Parliament in 2018 and concerning 5,000 buildings. The project has only been postponed under pressure from civil society.