Hakainde Hichilema: Where does Zambia go from here?

Africanews jounalists, Ruth Lago and Ronald Kato delve into the Zambian election which ended with the victory of the opponent Hakainde Hichilema.

How did Zambia managed to achieve a peaceful transition ?

We must say that it is quite a culture in Zambia. The country has had, you know, a fairly long history of organizing peaceful elections, and it's not really new for incumbents to lose there. The last time an incumbent lost was in 2011 when Michael Sata came in with the Patriotic Front. Unfortunately, he died four years into his term. But we must also commend the winner of this year's election, Mr Hakainde Hichilema for running a campaign that knew where to touch. He mobilized. He campaigned to the young people. He made sure that his message, you know, gets out to the youth of Zambia. He exploited social media to his advantage. So the messaging was on point. He weaponized the social and economic problems taking place in Zambia today. The soaring food prices, the inflation, you know, the kwacha, the currency of Zambia losing value. He took advantage of all these problems, weaponized them, and turned them into vote-winning issues.

What are the main challenges that  await the new Zambian president ?

Mr. Hichilema faces a tough task of turning around Zambia's economy. Unfortunately for him, he doesn't have the luxury, the opportunity that the man he's replacing had when he was coming into office six years ago in 2015. Things were slightly better then. Now things are bad. And it's not just Zambia. It's the global context. There’s the coronavirus, it's ravaging economies and things are not going to get better any time soon.

So his first task is to turn around the economy. He's made, you know, a fair amount of promises during his campaign. And one of the promises was to cut down on debt. It is going to be interesting to see how he plans to revive the economy without borrowing and without raising taxes. If you say I'm going to cut down on debt, chances are that you're going to tax your people more and this will bring him, you know, conflict with the people that have just voted him in.

But there is some good news. Zambia, even before this election, was already in talks with the IMF for a funding programme. I think that now there's a new government, these talks will be concluded soon. Some experts are talking about next April. So that will be a very important shot in the arm for the Zambian economy. I think the other thing that he can do is to go back to the negotiating table with Zambia's creditors. One of the most important creditors is China. Zambia holds about three billion dollars of Chinese debt. There was an agreement reached last year under the DSSI for China to hold back, to restructure payments. This agreement, I suppose, will have to be renewed. So he has to talk to Zambia's creditors to hold off, to ask for debt to be restructured.

What does this election mean for the rest of Africa, especially for countries holding elections soon ?

Elections whether successful or not, are mostly the product of local contexts. And these are, you know, legal or political contexts. So it is there's no clear way to say how the success of the Zambian election can affect elections elsewhere in Africa. But I think that we can say that parties in countries where elections are being planned can learn from the success of the messaging of the opposition party in Zambia, which is soon to be the ruling party. But they can also learn in terms of the legal environment, in terms of how the Zambian election commission run this election. As I said in the beginning, there was a very strict and many times impartial application of the electoral code. And this is important for the success of any election anywhere. 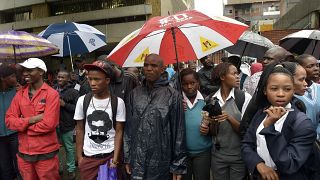