More than 800 people have been rescued in the Mediterranean Sea over the last few days. Two rescue vessels, the "Ocean Viking" and the "Sea-Watch 3" say they have reached capacity with hundreds of migrants onboard each.

Volunteers reported tension when one of the migrant's boats was about to sink, with many people having to jump into the water.

According to the humanitarian rescue organization SOS Mediterranee, which runs the Ocean Viking ship, there were more than 550 migrants and refugees on board.

Blocked at sea sometimes for several days, with the heat, or seasickness, some faint on deck and the situation becomes even more on untenable.

Among those, at least 28 women and 33 minors - two thirds of whom appear to be unaccompanied. The Marseille based organisation said the youngest survivor rescued was just 3 months old.

According to a tweet from the rescue organization Sea Watch, only one person with urgent medical needs had been allowed to evacuate. The hundreds of others are still waiting.

The German rescue organisation Sea Watch tweeted that following the rescuing, only one person with urgent medical needs was allowed to evacuate, with hundreds more waiting adrift for a safe port.

The two charity groups have had wait for permission to dock at a southern European port to safely disembark the remaining migrants. The two organizations say the number of Mediterranean crossings has picked up once again.

The United Nations High Commissioner for Refugees called in early July for Europe to urgently adopt an automatic distribution mechanism to provide a better reception for refugees, and not leave only the countries bordering the Mediterranean on the front line.

According to the International Organization for Migration, at least 1,146 people have lost their lives during these attempts to reach Europe this year alone, but experts estimate the number of unreported cases to be much higher. 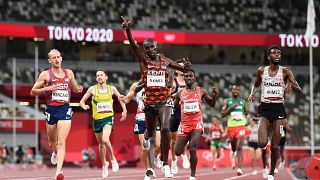