A Casablanca court sentenced prominent Moroccan journalist and activist Omar Radi to six years in prison on Monday after finding him guilty of espionage and sexual assault.

His colleague, Imad Stitou, was convicted of “participation in rape” and sentenced to 12 months in prison, with six months suspended.

The Casablanca court ordered Radi and Stitou to pay the equivalent of more than $22,300 to the victim of the alleged sexual assault.

Charges held against Radi have been heavily criticized by rights groups who claim they are politically motivated. Since his arrest in July 2020, the investigative journalist has always denied any wrongdoings.

Omar Radi's arrest had once more fuelled concerns, with many denouncing a crackdown on news media, and a harrassment of critics of the government.

In a June 2020 report, Amnesty International said Moroccan authorities had unlawfully spied on the journalist through his phone by using sophisticated surveillance software.

A claim disputed by the Moroccan government.

However Radi was found to have been amongst 189 journalists around the world identified as being on a list of allegedly targeted clients of Israeli-based NSO Group, a hacker-for-hire group using the "Pegasus" military-grade malware for potential spying on journalists, human rights activists and political dissidents, as reported by a global media consortium this week. 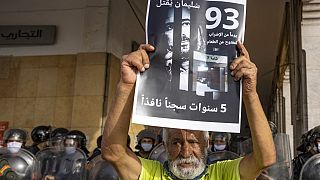