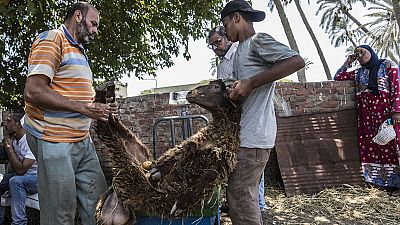 It's usually a very festive season for Muslims accross the world. But this year, some won't be able to experience Eid al-Adha to the fullest.

As a result of the Covid-19 pandemic and the high prices of livestock, many Egyptians won't be able to afford sheep to slaughter.

Qanater El Khayreya, has one of the main farms that supplies Cairo's markets. But even there, there were few customers.

"The cancellation of the pilgrimage this year and the reduction of the number of pilgrims led to a decrease in exports devoted to the ritual of sacrifice. Meanwhile, those who wanted to go and to the hajj but couldn't, they have spent more on Eid," adds Hany Kamel, a livestock farmer at the farm.

Egypt used to export sheep to Saudi Arabia for pilgrims to sacrifice in Mecca. But with the Saudi Kindgom drastically reducing worshippers allowed to perform the Hajj, imports were brutally stopped.

"There are quantities of sheep available on the market, but prices are relatively high. This is not due to a lack of supply, but unfortunately, the costs of production paid by the livestock farmers have increased because of the Covid-19 pandemic, which has caused some problems in the import of corn and fodder in general, which has led to a fluctuation in prices," explains general production manager at the Egyptian ministry of Agriculture Saeed Desouky.

Despite Egypt importing some 96,500 cows and 70,000 sheep for Eid al-Adha, according to the ministry of Agriculture, prices have sored all over the country.