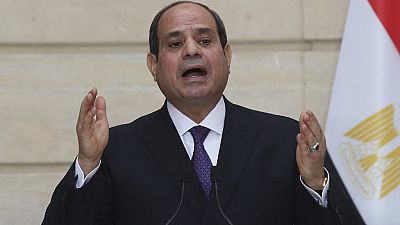 Egypt on Sunday released six activists, including journalist and blogger Esraa Abdel-Fattah, one of the symbols of the 2011 revolution. Their release comes days after the United States raised concerns about human rights violations in the North African country.

Since President Abdel Fattah al-Sissi came to power in 2014, Egyptian authorities have been conducting a ruthless crackdown on all types of opposition, both Islamist and liberal.

Analysts say the release of these activists is a way to reassure internatonal allies and partners, particularly after the United States last week warned Cairo against targeting human rights activists and indicated that this would be taken into account when negotiating arms sales between the two allied countries.

In a surprise move, Egypt's prosecutor's office on Saturday night ordered the release of Esraa Abdel-Fattah, 43, after nearly 22 months in pre-trial detention without trial.

In Egypt, by law, periods of pre-trial detention without trial can be extended up to two years.

Lawyer Khaled Ali posted a photo of the activist on Facebook after her release from prison on Sunday.

Known for being one of the founders of the "April 6 Movement" in 2008, the starting point of the revolution that would climax three years later in the wake of the Arab Spring with the mobilization of millions of Egyptians taking to the streets to oust Hosni Mubarak from power, Esraa Abdel-Fattah, was arrested in October 2019. She was arrested for "disseminating false news" and "collaborating with a terrorist group." Her arrest had provoked much criticism.

Opposed to the Muslim Brotherhood when it came to power in Egypt in 2012, Esraa Abdel-Fattah had supported calls to overthrow their regime and the protests that led to the departure of Islamist President Mohamed Morsi.

She had also been imprisoned during the time of Hosni Mubarak, after the creation of the "April 6 Movement" and her call for a workers' strike in the city of Mahalla in the Nile Delta the same year.

The Egyptian judiciary also decided on Saturday to release activist Abdel Nasser Ismail, leader of the leftist Popular Alliance Party, who was arrested in September 2019 for "participating in a terrorist group," according to human rights lawyers.

Egyptian journalist and opponent Gamal el-Gammal, arrested upon his return from Turkey in February, was also released, as were lawyer and human rights activist Mahienour el-Masry, and journalists Motaz Wadnan and Mostafa el-Asar.

All of them had been in pre-trial detention since their arrest and were accused of spreading "false information" and cooperating "with terrorists" or other "illegal groups.

They were released pending the completion of the investigation into them, according to judicial and security sources.

"We have been expecting for a while that releases would take place," Mohammed Saad Abdel Hafiz, editor-in-chief of Al-Shorouk newspaper, told AFP. "Already last week, 150 little-known activists had been released and some officials had told us that others would follow."

These releases "aim to calm tensions in the country and could have a positive impact on the image of Egypt abroad," says Mustafa Kamel al-Sayyed, a professor of political science at Cairo University.

"But I doubt that it will change the situation because there are many political prisoners" still in detention, he adds.

A former editor of the Al Ahram newspaper, Mr. Salam had accused the president of endangering the country's interests by failing to resolve a dispute with Ethiopia over the construction of a dam on the Nile, and demanded that he "resign immediately.

Egypt has more than 60,000 prisoners of conscience, according to NGOs, and the country is regularly singled out for human rights violations in the country.

On Wednesday, Washington reacted to the announcement of the indictment of the influential Egyptian activist Hassam Bahgat, executive director of the Egyptian Initiative for Personal Rights (EIPR).

"We have indicated to the Egyptian government our strong belief that individuals such as Hossam Bahgat should not be targeted for peacefully expressing their views," said U.S. State Department spokesman Ned Price.