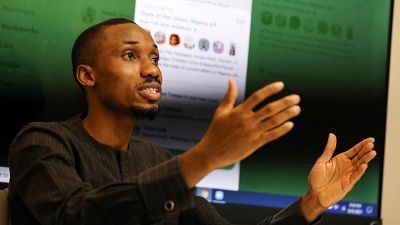 What does it mean to be Nigerian?

In a country of 210 million inhabitants with more than 500 native languages and hundreds of ethnicities that was colonised by the Portuguese and the British, identity can be a daunting question.

But using the power of social media, two activists have decided to take it on through a forum called The New Nigerian.

Hosted on the platform Clubhouse, the group's 45,000 members can join chatrooms on languages and culture, politics and citizenship, pop culture, technology and well-being.

Its creators say the goal is to help subscribers "relearn to be Nigerian".

"Like in a lot of 'Black countries', many people don't know their history and their culture," says Lola Adele-Oso who co-founded the forum with Eniola Mafe.

A former activist with the movement to release schoolgirls kidnapped by Boko Haram, Adele-Oso runs a lifestyle brand that promotes everything from apparel to small-group travel.

"Who are we? Who are our heroes?" she says. "As citizens, we can't become a better version of ourselves if we don’t know where we come from."

'Indifference not an option'

The inspiration for The New Nigerian came during last October's #EndSARS protest movement against brutality by the country's SARS - or Special Anti-Robbery Squad.

The protests that followed broadened to a larger call for reform and were the largest in modern Nigerian history before security forces cracked down on demonstrators.

A former activist, Mafe's work in technology and sustainability requires her to travel between Geneva and Lagos.

"I was in Geneva at the time, my eyes on Twitter, my ears on Clubhouse," says Mafe, "Within the diaspora, we were trying to know what’s going on, debunking fake news, organise donations."

"It became soon evident that we could use this platform as a tool. We decided to keep the momentum."

The "Lekki killing" of October 20, 2020, when the army opened fire on protesters, marked a brutal end to popular #EndSARS protests in the streets and also on the Internet.

But for Mafe and Adele-Oso, it also became the moment to start awakening consciences with civic and political engagement.

"Being politically indifferent is not an option anymore," Mafe says.

Within days of being created, The New Nigerian gathered thousands of subscribers, becoming one of the fastest growing communities on Clubhouse.

A platform for live audio content that reports some 10 million weekly active users, Clubhouse lets people create, participate in or just listen to discussions on all kinds of topics.

The New Nigerian's subscribers log on to discuss current affairs and life in Africa's most populous country.

While many of the participants are from the south of Nigeria, the founders say the platform promotes a sense of unity in a country where ethnic and separatist tensions always simmer close to the surface.

Some hardliners in southern states have been calling for more independence or even a breakaway for their regions.

Mafe describes a "New Nigerian" who is able to embody diverse points of view.

"They are very progressive in terms of gender or sexual orientation," says Mafe.

"We want to include everyone and we will never be tribalistic. Never."

With fellow researchers or invited specialists, they discuss the slave trade and decolonisation, but also the heritage of the great Edo kingdoms or the Sultans of Sokoto.

The talks draw up to 200 listeners from Nigeria and around the world.

"Nigerians are hungry for this knowledge. Sometimes we start at 11pm until 7am! But I have to say... I love talking!" he says.

Abia says he was beaten by police during last October's protests. Like Mafe and Adele-Oso, he also identifies the #EndSARS movement as a turning point he says pushed people to take an interest in politics.

"You have to understand the political establishment, the social contract, the principle of justice and human rights, to know who you want as a leader," he says.

Since the protests, and with the country's economy hit hard by the pandemic and spiralling inflation, Abia says some middle and upper-class Nigerians have left to live in Dubai, Ghana, Great Britain, the US or Canada.

But Abia has decided to stay and help build the new Nigeria of which he dreams and discusses daily.

"I dedicated my life, my skills, my education to this country," he says. "I will stay here till I die."