In the trauma center of Beni General hospital in eastern Democratic Republic of Congo, over a dozen of survivors of rebel attacks are receiving treatment for gunshot wounds and injuries inflicted by machetes.

They report with broken bones, while some need complex surgeries to survive.

Katembo Safari was shot in the leg when gunmen attacked his village of Mandumbi in June. He's had surgery to remove the bullet and is slowly recovering.

"The enemy entered the village of Mandumbi very suddenly. It was a stampede, a mad rush. We were running and suddenly I heard a bullet hit my thigh," he said.

The unending violence in the east is keeping the unit which is run by the Rec Cross busy. President Felix Tshisekedi has placed eastern Congo under a state of emergency but armed groups continue to carry out deadly attacks against the civilian population.

Eastern Congo is home to dozens of armed groups that the United Nations has blamed for killing hundreds of people in 2020.

"The number has been very high lately because in the last three days we have admitted 12 new patients. At the moment we have 45 patients in hospital, of which 42 were injured by firearms and 3 by hand-to-hand weaponry," said Godefroid Kombi Mbeho, a surgeon at Beni General Hospital.

As one patient is wheeled out of the theatre, these health workers know that there will be no end to casualties until guns in this part of the country fall silent.

President Tshisekedi's 'state of siege' has been criticized for failing to deliver the resources needed by the army to defeat militias. 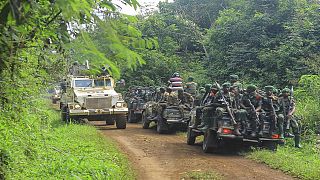