A violent campaign launched by Islamic extremists in the oil-rich Cabo Delgado province has led to a rapidly escalating humanitarian crisis.

Women and children are particularly reeling under pressure. Viaze Nassir was forced to flee her village in Quissanga District after an attack by insurgents in September 2020.

After a harrowing escape, the 41-year-old now lives at Metuge camp, with her injured husband, three surviving children and four grandchildren.

"They started shooting and attacking the village. At that moment, this baby was sleeping in the house. I went inside the house to take the baby, and they came in… When I picked up the baby, they shouted, 'Hey stop, we will kill you! Stop we will kill you!' I begged, I said no, please don't kill us", Nassir recalled.

Many of those who fled the insurgency in Palma to neighboring districts are being hosted by the local communities. However, the extra mouths to feed are putting pressure on families and host communities.

"I would like my children to grow up and study, to help me and help each other because I am without alternatives. In our land, we produced and sold food to support our children's school costs and here that no longer happens, we just stay. These are my children and they have no other family members, so they just depend on me. I feel even more sorry at other times for knowing that these children had a family and help, but today they no longer have help", Nassir said.

On Tuesday, the WFP said it might suspend food assistance completely, unless it raises $121 million to help thousands of people, as families are totally reliant on humanitarian support.

"This was a tourism area, fishing, good economy, people had a good way of life but guess what? Insurgents, terrorists come in rip families apart, burning their homes, killing people, raping women, just exploiting a good way of life and so the World Food Programme is now in here trying to bring hope to people…715,000 people that we are now supporting", said WFP Executive Director, David Beasley.

Children are worst affected by the rising rates of malnutrition in Mozambique. Almost 21% of displaced children under 5 years old, and 18% of children of host families, are underweight. That’s according to a recent survey by UNICEF and WFP.

Also, the rates of chronic malnutrition, which has lifelong ramifications, are at an alarming 50% of displaced children and 41% of children from host communities, the survey revealed.

The UN says the displacement has left at least 730,000 people in Cabo Delgado with no access to their lands and no means of earning a living. It added that 363,000 are expected to be deemed by the UN as "highly food insecure" come the lean season beginning in October. 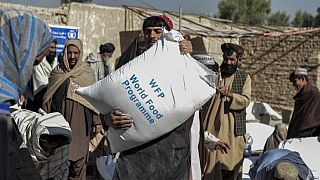