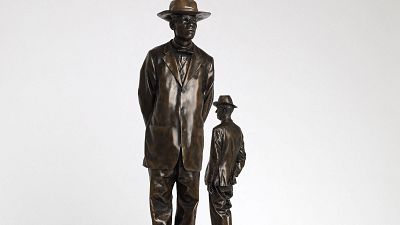 A sculpture of African baptist preacher John Chilembwe, who led the 1915 Chilembwe uprising against colonial rule, will look over London's landmark Trafalgar Square for the next two years, the mayor's office said Monday.

"Antelope", by Samson Kambalu, restages a 1914 photograph of Chilembwe and European missionary John Chorley as a sculpture.

In the sculpture, a larger-than-life Chilembwe is shown wearing a hat, defying a colonial rule that forbade Africans from wearing them in front of white people.

Chilembwe, now considered a national hero in Malawi, led a rebellion against British colonial rule in Nyasaland (modern-day Malawi) to protest against racial discrimination of the colonial administration.

"By increasing his scale, the artist elevates Chilembwe and his story, revealing the hidden narratives of underrepresented peoples in the history of the British Empire in Africa and beyond," said the office of mayor Sadiq Khan.

The "fourth plinth", which marks one corner of Trafalgar Square, is one of the most coveted art commissions in the world, and is often the source of controversy.

Each work stays in place for around two years before being replaced.

Kambulu's work will be unveiled in 2022, and will make way for Teresa Margolles' "850 Improntas" in 2024, which features casts of the faces of 850 transgender people from around the world.

The masks will be arranged in the form of a tzompantli, a skull rack from ancient Mexican Mesoamerican civilisations.

"I'd like to congratulate Samson Kambalu and Teresa Margolles as the next artists to have their work displayed," said London mayor Sadiq Khan in a statement.

"They will be shining a spotlight on important issues that our society continues to face, and I know they will spark debate and interest at home and abroad."

Three of the four plinths in Trafalgar Square have permanent statues. A programme to commission works for the empty fourth plinth began in 1998.