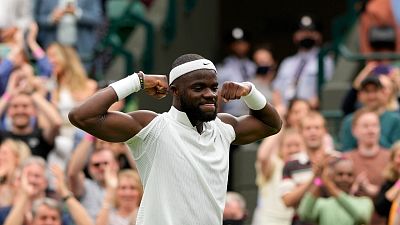 African American Frances Tiafoe Jr pulled off the first major upset at Wimbledon 2021 on Monday as he defeated world-ranked fourth male player Stefanos Tsitsipas 6-4, 6-4, 6-3 to advance to the second round.

The athlete born to parents from Sierra Leone did not miss returning serves to the top player -- who was favoured to win the match after placing second to Novak Djokovic in the French Open final earlier this month, as he sealed the biggest victory of his career for the first time in 12 attempts.

Monday's win continues a stretch of great tennis playing from Tiafoe which has included a trip to the quarterfinals at Queen's Club and a title at the Nottingham Challenger tournament.

Stunning success for a child of immigrants who escaped to the United States from the 1991 nearly decades-long Sierra Leone civil war.

Tiafoe's parents later met in suburban Washington, D.C., where his father worked as a day labourer and his mother Kamara as a nurse.

In 1998, in Maryland, Frances and brother Franklin were born and both children have since gone on to become rising international tennis stars.