Anthonio Guterres’ message for the international day for the elimination of sexual violence in conflict on Saturday June 19.

In Ethiopia’s northern Tigray region, this surgeon highlights the pain even as he treats it.

‘’It's getting worse. In the beginning, it was the shelling and also the killing, but subsequently the tortures were getting more, there are women who have been raped, some of them have come, they were brave enough to come and report. There is a huge accounts of rape particularly in the place where we were but it is the same in the whole Tigray. The killing is continuing’’, said Tewodros Tefera, a surgeon and refugee.

One 19-year-old said she was raped by an Ethiopian soldier. Now she's 6 months pregnant.

After failing to self-abort her pregnancy, she is now desperately hoping a local hospital will help her.

The United Nations has described sexual violence in conflict as ''cruel tactic of war, torture, terror and repression''.

Guterres highlighted the turmoil caused by the pandemic and said it ‘’ has made it even more difficult to hold perpetrators of sexual violence to account’’.

‘’Even as we respond to the pandemic, we must investigate every case, and maintain essential services for every survivor’’, he added. 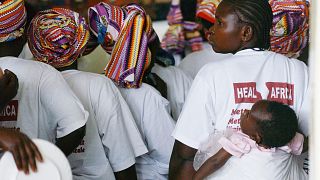