On the outskirts of the small village of KwaHlathi -- at five hours drive from Johannesburg in eastern Kwazulu-Natal province, thousands of South Africans have come out on a quest to find unidentified crystal-like pebbles.

The believed precious stones were unearthed by a cattle herder a few days prior.

News of the finding spread fast, triggering a rush to the site despite messages of caution by the government warning the stones could be worthless.

"I heard that people are digging diamonds here, so I said no, let me come and take a try only to find that I was going to find one. Here's it, I'm holding it, and it's like a pyramid, as you can see. It's for real, something real.

She spits out the dirt after cleaning the pebble in her mouth, convinced that she is holding a fortune. Like Lihle Magudulela, thousands of people have flocked to this poor corner of South Africa in a mad scramble for alleged diamonds.

At daybreak, there are already hundreds of them on the hillside in the small village of KwaHlathi, a five-hour drive from Johannesburg in eastern Kwazulu-Natal.

Armed with shovels, picks or sticks, they turn over the soil and break up the wet clods with their bare hands, each time hoping to see the shine of the famous precious stone. Photos on social media last weekend caused a stir.

The Cullinan, The largest diamond in history at 3,106 carats was discovered on South African soil in 1905 before industrial mining. The diamond was mined just a few metres from the earth's surface with a pocket knife.

The country’s world-leading mining industry -- although currently in decline, is still a great contributor to its economy -- accounting for over 8% of GDP and nearly half a million jobs.

So with a shovel found in a garage, Thulani Manyathi, 36, is pursuing her dream of wealth. "I want to go and live in Dubai, have a two-storey house. It will change our lives," he enthuses, a few stones already in his pocket. Coming from Alexandra, one of the most miserable townships in the suburbs of Johannesburg, he digs with his four daughters. "No school, today we dig diamonds," he explains.

On the hill, rumours are already circulating that "foreigners" are buying up the stones in the nearby town of Ladysmith. For a few hundred rand, some have already started selling their finds to those willing to try to market them.

"These are real," Lihle Magudulela, a single mother of three, told AFP. In her hand, she holds up a small pile of dirty stones, which might as well be ordinary glass crystals. "I will be able to buy a car, a house, put my children in a public school," she says.

"We are poor, I don't have a job. But this could change everything," says Precious, 38. Next to her, her 14-year-old son holds a transparent stone the size of a ping-pong ball in his fist. He and his 3-year-old sister spent the night digging in the dirt with their mother. "They're not tired, we need the money," she says in the early hours.

The value of the still-unidentified precious stones is yet to be determined by experts. Some are not ruling out the possibility of them being diamonds -- although, others believe it could be highly improbable.

"These are not diamonds," says 18-year-old Bhekumuzi Luvuno, who still wanted to take a chance and find out for sure. But with one of the mysterious stones he dug up himself in the night, he is convinced that "people are wasting their time here".

"There might be a probability of diamonds, 'cause it's close to a river and we're finding stones like this, but yeah. At the moment I think everyone is finding quartz, because obviously, crystals like this have a certain heat radia [sic], to them, so, we don't have a reader at the moment, so yeah, we are waiting for that then we will know indefinitely." 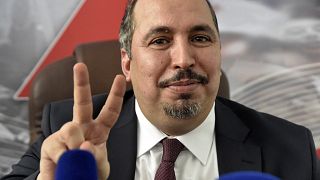 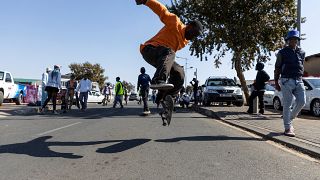