The head of Mali's junta is expected to be sworn in on Monday as the west African country new President.

He accused Ndaw and prime minister Moctar Ouane of appointing a new cabinet without consulting him.

It was the second seizure of power masterminded by Goita in under a year. Last August, he lead a group of young soldiers who moved against President Ibrahim Boubacar Keita, capitalizing on weeks of street protests and frustration among frontline troops.

Mali has since been suspended by the African Union and regional bloc ECOWAS.

The new coup threatens to derail Mali's transition back to civilian rule. Goita has vowed to hold elections according to the old schedule.

On Friday, hundreds rallied in Bamako to voice support for the army. They also denounced international pressure against Goita.

The march was backed by the influential M5 movement. Activists and political parties have accused the military of seeking to dominate power, and of frustrating a return to democratic rule. 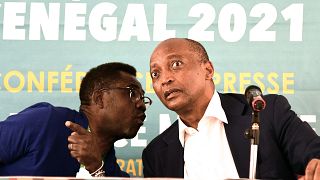