Nigeria's Minister of Information and Culture,, critisizes Twitter for deleting a comment on President Buhari's account after he alluded to the country's civil war in the context of recent turmoil.

Twitter removed the remark, noting it had violated its rules.

"Twitter may have its own rules, it's not a universal rule. If Mr. President anywhere in the world feels very bad and concerned of a situation, he is free to express such views" says Lai Mohammed, Nigeria's minister of information and culture.

"When people were burning police stations and killing policemen in Nigeria during #EndSARS, for Twitter it was about the right to protest. But when a similar thing happened on the Capitol, it became insurrection" he added.

Buhari, a former general, made a statement on Tuesday referring to recent violence in the southeast, where officials have blamed separatists for attacks on police and election offices.

Half a century ago, one million people died during a 30-month civil war after separatist generals declared an independent region for the Igbo people in Nigeria's southeast.

He further accused Twitter of ignoring messages from Nnamdi Kanu, leader of the outlawed Indigenous People of Biafra, or IPOB separatist group, which he said promoted violence. 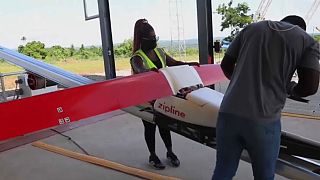