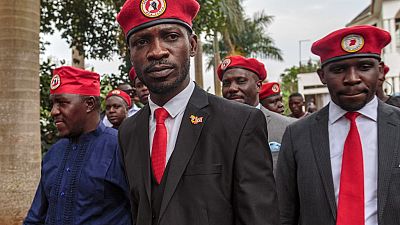 Veteran ruler Yoweri Museveni was declared the winner of the controversial vote and was sworn in for another term in May.

The election campaigns were dominated by episodes of deadly violence against Museveni’s opponents and their supporters. Hundreds of opposition activists and supporters have gone missing in a post-election crackdown by security forces.

Africanews sat down with Wine at his home in Magere, near Kampala to talk about Uganda’s ‘unfinished election’ and his party’s new role as the official opposition.

Africanews: President Museveni was recently sworn in for his sixth term and your party has become the official opposition. Given the political space in Uganda only opens to the opposition during election campaigns, what is going to happen between now and the next election in 2026?

Bobi Wine: First of all Museveni’s swearing-in was illegal. He is not a legitimate president and neither are we opposition. Our members of parliament were relegated to the opposition courtesy of their numbers and courtesy of the machinations of the regime.

We said countless times that we are going to use every opportunity and every position; elective, moral, religious, or cultural to [move] forward our struggle for a free and democratic Uganda. And it's on that premise that our leadership decided to take up those positions in parliament and use them to agitate and advocate for freedom and democracy.

Of course, while that is happening, countless people are being abducted, are being arrested, and rights are continuously being abused.

Africanews: As a new party, how do you plan to navigate Uganda's heavily militarized politics?

Bobi Wine: Well, Uganda's politics has been heavily militarized and commercialized. From where I stand, I am going to focus on mobilizing and enlightening the people of Uganda about their plight and their ability to make a difference on their own. While parliament will be another front for our struggle, so should the population.

Africanews: President Museveni was sworn in despite hundreds of opposition supporters being in prison. Do you think the international community has paid enough attention to the situation in Uganda?

Bobi Wine: The people of Uganda feel largely betrayed by the international community. While the international community professes values and rights and respect and upholding of, uh, you know, democratic principles, they have largely betrayed the people of Uganda. It is clear to everybody that General Museveni is funded by the West.

So we feel betrayed by the international community, which we are a part of as the people of Uganda.

Africanews: Uganda continues to receive aid and recently agreed a major oil deal with Total despite mounting evidence of human rights violations. Should foreign investment in Uganda be conditioned on human rights?

Bobi Wine: As I said, we feel largely betrayed. We have constantly called on the international community to make respect for human rights, democracy, and the rule of law, a precondition for cooperation with Uganda. But, of course, as it has turned out, all these pleas have fallen on deaf ears.

That makes us think that the international community is more concerned with business and not than values. It makes them partners in crime, abetting and supporting the domestic terrorism that is perpetrated by the Museveni regime.

Africanews: You challenged the results of the January 14 election in court but later withdrew the petition. So it can be argued that Mr. Museveni won fairly. And despite claiming you had evidence showing that you won, you have never presented it for scrutiny.

I have presented numerous pieces of evidence. The court declined it. I presented videos [showing irregularities], and I have shared them on social media too.

It is the same evidence that the international community, the European Union, and the United States State Department relied on to discredit and denounce the purported elections on the 14th of January because they were neither free nor fair. So that evidence has been there. It has always been talked about. This the first time I am being told that I did not support my case with evidence.

Africanews: What lessons do you draw from the election?

Bobi Wine: Many lessons. But in summary, I would say Ugandans are on their own. They are not supported and won't be supported by the clearly compromised state institutions, not even the international community.

Ugandans are out on their own. Those that have the guns can oppress the people and nobody will hold them accountable until the people themselves decide to rise to the occasion and hold these people accountable.

So Ugandans are on their own. That’s the biggest lesson I have had to learn.

Africanews: You told me in our interview shortly before January 14 that 'Ugandans were casting a protest vote'. Are you still convinced that elections can bring about change in Uganda?

Bobi Wine: For as long as the international community maintains the same attitude, a complacent attitude – and as long as the people of Uganda don’t step up, we might never see change through the vote.

We just get a few agitators elevated to positions of power, of comfort, therefore calming them down. But to get the fundamental change, it's going to take the people of Uganda massively getting involved, not only in terms of the election but also in terms of asserting their right and asserting their will.

Africanews: You have a new song 'Akatengo'. In it, you say that the Ugandan regime has used terror to instill fear among people and that they too should give their rulers fear. Are you calling for an uprising?

Africanews: Thank you for your time. 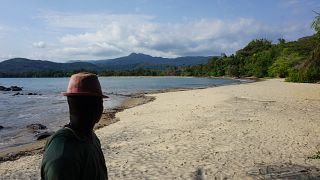