Africa needs $285 billion by 2025 to try to get its head above water. It comes as the continent's economies struggle after been hit hard by the coronavirus pandemic.

Among the avenues discussed at the recently concluded Paris summit on financing the continent's economies was the special drawing rights initiated by the International Monetary Fund (IMF) 52 years ago.

But this alternative is subject to the notion of quotas, which take into account the economic strength of each region of the world.

The principle aims to limit the rate of indebtedness but it is seen by many as far from satisfying Africa's expectations. $33 billion are estimated for the continent, but leaders say a minimum of $100 billion is required.

Faced with this small amount, African heads of state are waiting for a gesture from the wealthier economies. And in what could be a boost, French president Emmanuel Macron echoed the calls at the Paris summit. ''SDR shares to Africa must be given as a gesture of solidarity'', he said. And would the calls be heeded? The continent is keeping its fingers crossed.

Thomas Mélonio is the Executive Director in charge of Research and Innovation at the French Development Agency known as Agence française de développement (AFD). He tells Business Africa’s Ignatius Annor that: ‘’Eventually African economies need to be financed by themselves, by mobilizing domestic revenues through taxes. There are many, of course, Africans who have deposits, and this deposit needs to be converted into investment by the financial system. So we need development of the African financial systems so that Africa can finance its own development.’’

Cocoa prices across Ivory Coast, the world's biggest producer of the crop have fallen for the second year running and farmers are outraged.

But not in M'Brimbo, a village in central Ivory Coast which 11 years ago became a test bed for organic cocoa farming.

The local farmers' collective sells their high-quality produce at twice the market rate for non-organic cocoa. The chocolate made from their cocoa is sold in French supermarkets under the brand "Grand Cru M'Brimbo," and is highly sought.

"They now make 200...280 tonnes or so. This year, we will buy 200 tonnes from them. They have gone organic. They have very good quality cocoa that is recognized internationally", said Arthur Gautier, Agricultural engineer at Ethiquable.

Cocoa is the backbone of Ivory Coast's rise as one of West Africa's leading economies. Today, the country produces two million tonnes of cocoa per year, equivalent to more than 40% of the world's market.

But expansion has also come at a grim price for the environment. Forests have been destroyed and in some places herbicides and pesticides have tainted the soil.

"When we started, we saw the importance of being able to grow organic and we saw what organic has brought us. At the beginning I had a bicycle, today I can build (a house), I have a motorcycle. There has been a change in my life. I was able to send my children to school as they should be. So that means that organic farming is really a good thing’’, said Evariste Solo, grower and President of the Equitable Cooperative Society of Bandama (SCEB).

The cooperative produced 13 tonnes of cocoa with 33 farmers in 2010, and this year is expected to produce more than 200 tonnes, with 264 growers.

Ten other cooperatives in Ivory Coast now produce organic cocoa and others are expected to follow suit.

In Benin, entrepreneurship in the fashion and textile sector is booming. A renewed interest driven in recent years to consume local production and shifting fashion tastes is said to be behind the boom.

In this context, designer Elvira Akplogan has decided to create her brand, ‘’Loan-H’’. The Objective, to bring a modern touch to Kanvo, the woven loincloth of Benin.

"People have understood now that the woven fabric is a sought-after material, an exploitable material and we are working to make our woven fabric, the ''Loan-H'' woven fabric, more flexible, more manageable and easy to use in everyday life. My great wish is that Benin has its own real label because it is useless to have cotton at home and not to produce fabric", said CEO of ‘’Loan-H’’, Elvira Akplogan said.

And to achieve this result, the young woman is going to set up her own production unit of woven loincloth. For each collection, at least 54 rolls of 25 meters of woven loincloth are produced, as well as 300 pieces of clothing each quarter. The buyers are loincloth diehards and fashion professionals. Something which warms the hearts of the clothes makers.

"After finishing the fabrics when I find them in the ‘’Loan-H’’ stores, it gives me joy in my heart because I look at them and I wonder if it is myself who made them come out with the help of ‘’Loan-H’’. So I have potentials and I didn't know’’, said Christian Adjehounou, chief weaker at ‘’Loan-H’’.

Although the craze around the Beninese woven loincloth is so great, the quantities produced remain too low to satisfy demand. This is due to the lack of a developed textile industry in the country. 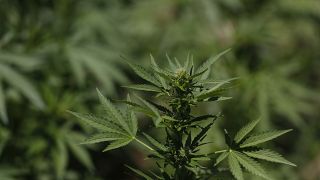