Relatives of those missing after the eruption of volcano Nyiragongo in eastern Democratic Republic of Congo waited outside the local hospital on Tuesday in Goma, hoping to hear news about their loved ones.

Desperate parents of young children were seeking information about their children following the volcanic eruption on Saturday that killed at least 32 people.

"I am here because since Saturday I have not seen my child who was separated from me when the volcano erupted," said Neema Sifa, the mother of a 9-year-old missing girl, outside the North-Kivu Provincial Hospital.

More than 170 children were still feared missing, and UNICEF officials said they were organizing transit centres to help unaccompanied children in the wake of the disaster as more than 150 children were reportedly separated from their families.

"We even sent communication in radios but unfortunately we do not have the signal of the child, so that we do not know where she is, we are in great pain," said Amani Fiston Butondo, the father of a 6-year-old girl currently missing.

The eruption caused about 5,000 people to flee from one neighbourhood of Goma, a city of about 2 million people, across the nearby border into Rwanda.

Another 25,000 others sought refuge to the northwest in Sake, the U.N. children's agency said.

On Sunday thousands returned, but in the region near Mount Nyiragongo, houses were found covered by lava.

The area is still on alert, several earthquakes have been felt in both Congo and Rwanda since Saturday. 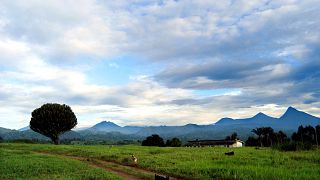