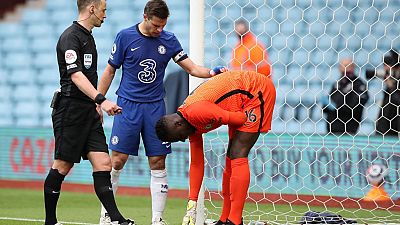 Chelsea's Senegalese goalkeeper Edouard Mendy had to be subbed after sustaining an injury against Aston Villa on Sunday.

The Blues keeper had to leave the field at halftime, complaining of a rib injury after colliding with the goalpost, in an effort to save Bertrand Traoré's strike that gave Aston Villa their first goal.

Despite Ben Chilwell pulling a goal back for Chelsea, Villa ended up winning 2-1, thanks to goals by Bertrand Traoré and Anwar El Ghazi.

Now the Blues keeper may miss out on a key game, as Chelsea prepares to face off Man City in the UEFA Champions League Final, perhaps their most decisive game of the season.

"He fell on the frame of the net. He has big pain in his ribs," Chelsea's Thomas Tuchel said.

The Blues' head coach said after the game that he will have to wait for his keeper to get a scan to see if Edouard Mendy can hold his place between the sticks in Porto.

"We need to wait until we get home and we will do some images," he said, adding that he hopes to see his star keeper fit on Saturday.

Mendy has been a key player in Chelsea's squad this season, with 16 clean sheets in 31 EPL games.

The Senegalese goalkeeper has also shined in Chelsea's UEFA Champions League run, making sure no shot went past him in 8 out of 11 European games.