Thousands of people took part in a demonstration in Nouakchott on Wednesday to denounce the "massacre" of Palestinians by Israel, an AFP reporter noted.

The march, organized at the call of power and opposition parties and civil society organizations, took place without incident, from the city center to the headquarters of the United Nations Development Program (UNDP) in the Mauritanian capital, over a distance of 5 km.

"Unprecedented massacre," read a sign held up Wednesday by demonstrators in Nouakchott, numbering at least 10,000 according to an AFP journalist and estimated in the tens of thousands by the organizers.

In a text handed to UNDP officials in Nouakchott at the end of the march, the organizers called on the UN to "take (its) responsibilities in the face of this massacre of defenseless children, women, and old people and to sanction the Israeli criminals.

"Stop the massacre of innocents", "No to ethnic cleansing", "All for the defense of Palestine", chanted the demonstrators during the police-led march.

The United States has blocked a security council resolution calling for an end to the hostilities three times.

A new campaign was underway by China to secure de-escalation. State media reported Thursday Zhai Jun, Beijing's envoy for Mid-east had held with Palestinians and Egyptians and was due to speak with Israeli leaders, Russia, the European Union, and the United Nations.

Mauritania broke off diplomatic relations with Israel in 2009.

A new round of violence, the deadliest since 2014, has pitted Israel against Palestinian groups in the Gaza Strip since May 10. More than 230 people have been killed, the vast majority of Palestinians in the Israeli blockaded Palestinian enclave. 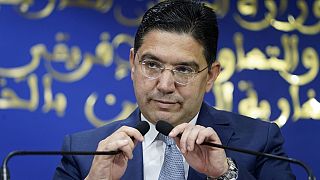