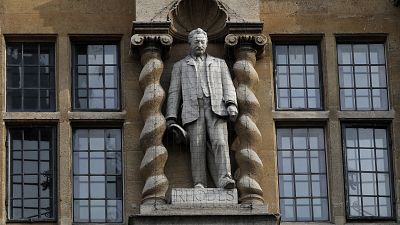 Despite calls for a statue of the British imperialist Cecil Rhodes to be torn down, the University of Oxford, where the statue is located, said it would not take it down on Thursday.

The British university said it would not take the statue down at this stage due to the cost and complexity of the operation. to remove it.

Rhodes was a 19th Century politician in southern Africa who believed in the superiority of the white race. Campaigners say he was racist and represented colonialism.

The "Rhodes must fall" campaign to obtain the removal of the statue that adorns the facade of Oriel College in Oxford had gained renewed vigor a year ago as part of the Black Lives Matter movement.

Thousands of people demonstrated in June 2020 shouting "Take it off!" and “Decolonise!”, shortly after in the UK city of Bristol, the statue of slave trader Edward Colston was knocked over and thrown into the water.

In South Africa, a statue of Rhodes at the University of Cape Town was taken down after protests in 2015.

A commission was set up to decide on the fate of the statue in Oxford and the majority of members supported taking it down.

But UK education secretary Gavin Williamson said it was a "sensible and balanced decision" not to remove the statue as "we should learn from our past rather than censoring history". 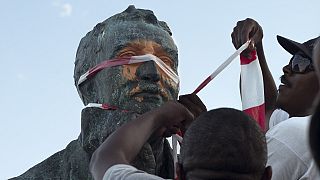 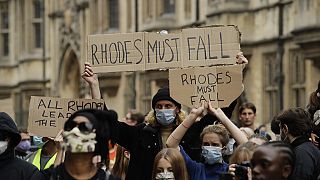