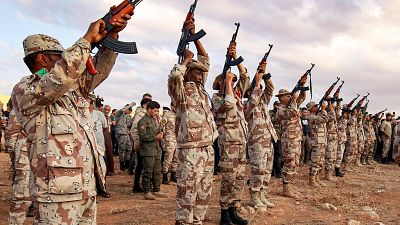 The U.N. chief has said foreign fighters and mercenaries remain in Libya in violation of last October’s cease-fire agreement and called for their withdrawal.

Secretary-General Antonio Guterres said in a report to the U.N. Security Council obtained Friday by The Associated Press that the smooth transfer of power to a new interim government, which took power in March, “brings renewed hope for the reunification of the country and its institutions and for a lasting peace.”

The U.N. estimated in December that there were at least 20,000 foreign fighters and mercenaries in Libya, including Syrians, Russians, Sudanese, and Chadians.

But he said progress must continue on the political, economic, and security tracks to enable elections to go ahead on Dec. 24.

Libya has been wracked by chaos since a NATO-backed uprising toppled longtime dictator Muammar Gadhafi in 2011, and split the oil-rich North African country between a U.N.-supported government in the capital, Tripoli, and rival authorities based in the country’s east, each backed by armed groups and foreign governments.

In April 2019, east-based commander Khalifa Haftar and his forces, backed by Egypt and the United Arab Emirates, launched an offensive to try and capture Tripoli.

His 14-month-long campaign collapsed after Turkey stepped up its military support of the U.N.-backed government with hundreds of troops and thousands of Syrian mercenaries.

An October cease-fire agreement that included a demand for all foreign fighters and mercenaries to leave Libya within 90 days led to a deal on the transitional government and December elections.

Guterres said in the new report that while the cease-fire continues to hold, the U.N. political mission in Libya has received reports of fortifications and defensive positions being set up in central Libya on the key route between the strategic city of Sirte, the gateway to the country's major oil fields and export terminals, and Jufra.

“Despite the commitments made by the parties, air cargo activities reportedly continued with flights to various air bases in Libya’s western and eastern regions,” the secretary-general said. “Reports indicated that there was no reduction of foreign fighters or of their activities in central Libya.”

Guterres said the government of national unity must prioritize security sector reform including filling senior civilian and military appointments, producing a roadmap for reunifying the Libyan army, and addressing the proliferation of armed groups.