A week after being crowned champions in Italy, Inter Milan were able to get together with their fans on Saturday afternoon.

Thousands gathered around San Siro to celebrate the players who ended the 9-year reign of Juventus Turin.

The Nerazzuri held their own on the pitch by clearly dominating Sampdoria 5 goals to 1.

Behind them, the race for Europe rages on, with Atalanta and Milan completing the podium with three games to go

Zlatan and Cristiano did not shine, unlike the Spanish midfielder of Moroccan origin Brahim Diaz -- who scored the first goal, or the Englishman of Nigerian descent Fikayo Tomori who scored for a 3-nil count.

With this defeat, Juventus is heading for the Europa League, especially since Napoli also had a great weekend, winning 4-1 against La Spezia with a new double for Victor Osimhen.

The Super Eagle star is unstoppable at the end of the season with 8 goals scored in the last 11 games. 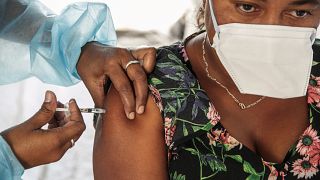