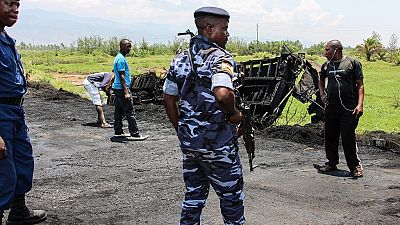 At least twelve people, including a senior army officer, were killed and several wounded Monday night in an ambush on vehicles in central Burundi, sources said Monday.

The police had mentioned on Sunday evening on Twitter a death toll of eight during an "armed robbery on four vehicles" in Muramvya, a town located about fifty kilometers northeast of the economic capital Bujumbura.

But several sources interviewed Monday by AFP put the death toll at 12.

"Ten people were killed on the spot and two others, including a little girl, succumbed to their injuries," said an administrative source on condition of anonymity.

"There are eleven bodies in the Muramvya morgue and a twelfth body, a woman who died while being transferred to a hospital in Bujumbura, is in a morgue there," a medical source also said.

A dozen people were also injured, according to this medical source and witnesses.

"We are saddened to see Burundi lose its children once again because of bandits. (...) All criminals must be put out of action," reacted President Evariste Ndayishimiye in a tweet on Monday.

A Burundian army officer, Colonel Onesphore Nizigiyimana, and one of his daughters are among the victims, according to the administrative source and relatives. He was returning from a family celebration with his wife and three daughters when the attack took place.

"The ambush was carried out four kilometers from the center of Muramvya by a dozen heavily armed men who shot at the colonel's car when it arrived there, then set it on fire. The colonel and one of his daughters were burned to death in their vehicle," said the administrative source.

Meanwhile, three other vehicles, including a bus, arrived at the scene and were also attacked with guns and grenades.

"People are in shock because it was a real military operation," a Muramvya resident told AFP on condition of anonymity: "This group then retreated into the Kibira forest after looting everything they could.

Such ambushes are increasingly common in Burundi. At least a dozen people were killed in several such attacks in late 2020.

In mid-April, seven people were also killed in the town of Rusaka, in the neighboring province of Mwaro, in an attack on a bar attributed by the police to armed bandits.