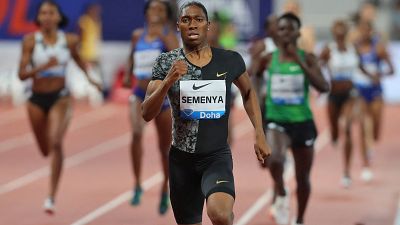 The two-time Olympic 800m champion Caster Semenya retained her South African 5000m title on Thursday in Pretoria with her best time over the distance, but still far from the Olympic minimum.

Gold medalist in the 800m at the London and Rio Olympics, the South African will not be able to defend her title in Tokyo. She has a natural excess of male sex hormones and refuses any treatment to lower her testosterone level below the maximum threshold (5 nmol/L of blood) defined by World Athletics to compete with women over distances ranging from 400 meters to the mile (1609 m).

Semenya has been fighting with World Athletics (ex-IAAF) for more than ten years but has already lost several appeals.

In August, the Swiss Supreme Court upheld the decision of the Court of Arbitration for Sport (CAS) in the name of "sporting fairness", thus validating the World Athletics regulation that defines a maximum testosterone threshold.

On February 19, Semenya decided to take the case to the ECHR in Strasbourg, which did not specify when it would rule.

The athlete initially planned to try to qualify for the 200m for the Olympics, but the battle with World Athletics was compounded by sporting considerations that led her to the 5000m.

"I'm 30 years old and if I continued to run sprints, it would be a risk to my muscles. On the long distances, you have more time to achieve consistency," said the three-time 800m world champion.