Sidi Brahim Ould Sidati was shot dead in Bamako on Tuesday morning by unidentified individuals.
The new is according to people close to the now-deceased acting president of the Coordination of Azawad Movements (CMA) -- an alliance of former Tuareg independence and Arab nationalist armed groups that fought against Malian forces in the north from 2012 before signing the Algiers peace agreement in 2015

As per a post on social media from the CMA, "We have just lost our president Sidi Brahim Ould Sidati assassinated this morning in Bamako."

Sidati was outside his residence, where he was repairing his electric generator when he was shot at between 6 and 7 am.

According to Attaye Ag Mohamed, who is in charge of legal issues within the CMA, Sidati was repairing an electric generator outside his residence when he was shot between 6 and 7 am by two assailants in a car.

This murder comes a few weeks after monitoring committee meetings between the Malian government and group signatories of the peace agreement resumed in the northern town Kidal in mid-February.

A region still controlled by armed groups despite the return of the army a year ago.

The presence of members of the armed groups in the government has also raised hopes of seeing progress in the implementation of the peace and reconciliation agreement, signed in 2015.

An investigation is already underway. 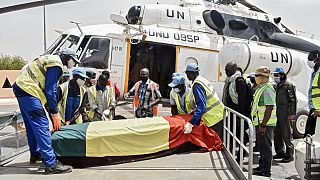