"We need help to provide shelter, food, water and clothing to the victims of this disaster," said agency boss Sinneh Mansaray, addressing the partners as well. international private and public organizations from Sierra Leone as well as NGOs and government agencies.

On the evening of March 24, a fire completely destroyed the slum of Susan's Bay, on the Atlantic Ocean, one of the largest in the city.

The authorities have not recorded any deaths but 409 people were injured and 7,093 people were affected by the disaster.

Almost three-quarters, 73%, of disaster victims sleep outside, while 16% stay with host families and 5% in their homes, according to the disaster management agency. The government has pitched 53 tents and is currently providing water to around 5,000 people, according to Sinneh Mansaray.

Mariama Kargbo, a widow who has lived in Susan's Bay for 20 years, says that the quantities of water and food provided are not enough and that the heat is unbearable in the tents.

“We used to live a simple family life in the slum, now you have to fight for anything to survive,” she says.

Of this district of barracks built on unsanitary land reclaimed from the sea, on the edge of the historic center, there are only piles of metal sheets and rare walls blackened by smoke.

Despite a soil full of diamonds, Sierra Leone, a former British colony, is one of the poorest countries on the planet.

Its economy, plagued by corruption, was devastated by a civil war (1991-2002) which left some 120,000 dead. It remains fragile after the Ebola epidemic which devastated it in 2014-2016, the fall in world commodity prices and the appearance of the coronavirus last year.

The European Union, the United States and the UN have indicated that they are ready to come to the aid of the victims. 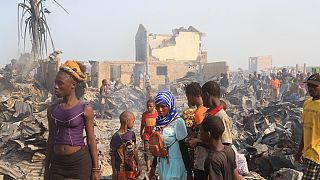 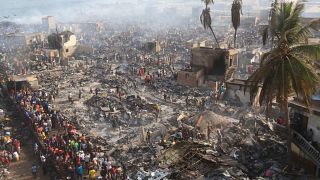