Egypt on Saturday buried the first victims of a train collision that left at least 19 people dead and 185 injured in the south of the country, where an investigation has been launched to determine the circumstances of the tragedy.

A surveillance camera shot by AFP showed a violent collision in which one car was thrown into the air in a huge cloud of dust. The disaster occurred in the village of al-Sawamaa Gharb, 460 km south of Cairo.

The overturned wagons and debris were completely cleared from the tracks on Saturday and rail traffic resumed, an AFP journalist noted.

The funeral of the victims began on Saturday and others are planned after the midday prayer in this Muslim country, while the area where the tragedy occurred is subject to a large security detail.

Funeral ceremonies were held in the early morning in the surrounding villages in privacy, with the inhabitants being particularly wary of the media in general and foreign media in particular.

The authorities initially reported 32 dead and 165 injured before lowering the death toll on Saturday to 19 dead and 185 injured. According to local media, both train drivers died.

As part of the investigation launched by Egypt's prosecutor general, the drivers' assistants, the control tower employee and the crossing operator are to be questioned and tested for drugs, and their mobile phones have been seized to examine their recent call records, the prosecutor general said.

Egyptian President Abdel Fattah Al-Sissi has promised punishment for those responsible for the tragedy: "Whoever caused this painful accident through negligence or corruption or any other reason must be punished with deterrence, without exception or delay.

- More accidents in the near future? -

According to a statement from the Egyptian Railway Authority, the Luxor-Alexandria train and the Aswan-Cairo train were travelling on the same track in the same direction. They collided after unidentified individuals "applied the emergency brake in several cars" in one of the two trains.

"We were at the mosque and then a child came to inform us (of the accident). We had heard the collision, so we ran and found carnage," said a 59-year-old local resident, speaking on condition of anonymity.

"I was returning to Cairo after a few days' leave," said Kamel Nagi, a 20-year-old conscript in Tahta General Hospital with a leg in plaster.

"Our train suddenly stopped and 15 minutes later the second one arrived and hit us. I saw it coming, screamed and then found myself on the ground in great pain," he said, his face covered in scratches as a nurse administered a painkiller injection.

He said improving the state of rail transport would "take time". "In the meantime, accidents like this can happen," he added.

The deadliest railway tragedy in the country's history occurred in 2002, when a train burned down, killing more than 360 people some 40 kilometres south of Cairo. 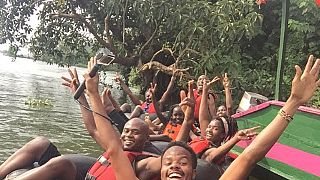