Ivory Coast began the trial of the massacre of over 800 people killed in 2011 in the remote village of Duekoue located in the Western region of the country.

817 people were executed in one day, according to the Red Cross while the UN puts the figure at 300.

The violence occured after the 2011 election. The United Nations said at the time pro-President Alassane Ouattara forces were behind the massacre.

In 2011, Ouattara was prevented from taking office as strongman Laurent Gbagbo stubbornly refused to leave and launched an offensive.

Ouattara won the 2020 election and was sworn in for a third term in December.

Among those facing trial is the former warlord Amade Ouremi nicknamed the Lord, arrested in 2013.

Oueremi was detained by the military in a village close to a national park, where he had been based for more than 20 years.

Ouremi together with his men is accused of assassinations, rapes, insurrections and other forms of atrocities.

He denied the charges but if found guilty, the former warlord might face a 20-year jail sentence.

Reports indicate that Ouremi began supporting anti-Gbagbo rebels as early as the year 2000.

Ouattara's government came under criticism for failure to arrest Ouremi. 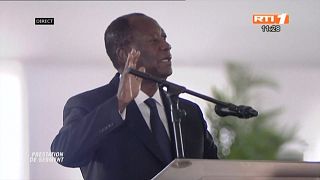