The Chinese-built link between Nigeria's economic hub Lagos and the city of Ibadan is also safer and cheaper.

The route began partial operations in December 2020 and provides a faster and cheaper way to travel between the two cities.

It counts Nobel laureate Wole Soyinka among its fans.

"We all grew up with the railway and it's just a shame that it ever sort of disappeared as a natural way of travelling," Soyinka said.

"It's not cheap right now but I hope by the time they are running properly it will be more affordable for most people. "

Although some say it is a little expensive at the moment it is also on the slow side.

The train travels at a stately speed, taking more than two and a half hours to traverse little more than 150 kilometres (90 miles) of countryside in southern Nigeria.

But many praise it for being safer than travelling by bus.

"Unfortunately the current issue that is going on is the kidnapping and all that," said security guard Sunday Akenfademi.

"But when you're coming from Lagos to Ibadan trip through bus, aside the safety of the road itself, we are also talking safety in terms of the drivers, because some of them are under the influence of alcohol.

"We are also talking in terms of safety of the motor, some of them are not roadworthy and they have not been tested."

Nigeria, Africa's most populous nation of 200 million people, is pushing ahead with reviving its railways, despite years of frustrating delays.

"Apart from the passenger train that we are doing, we also have the track that goes into the port and we also have the addendum to Tin Can Port, so it's a whole thing," said Jerry Oche, Lagos district manager of the Nigeria Railway Corporation.

The train is still operating skeletal services because of ongoing construction works at the tracks and stations. 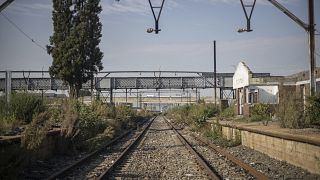