Nominations for the 93rd Academy Awards were announced on Monday.

It is the most diverse line-up of nominees ever - and a sign of change from the all-white shortlists that led to the #OscarsSoWhite hashtag starting five years ago.

Seventy women received a total 76 nominations, according to the Academy, a record for a given year.

In light of the discussion around diversity and the Oscars, three Black men, Leslie Odom Jr. for "One Night in Miami" and Daniel Kaluuya and Lakeith Stanfield for "Judas and the Black Messiah," were all nominated in the best supporting actor category.

Davis and Andra Day both landed in the Best Actress race, making it only the second time in Oscars history where two Black women will compete in the category in the same year.

Chadwick Boseman, who died last summer, was nominated for best actor for his performance in "Ma Rainey's Black Bottom," which also earned him a Golden Globe.

This year's ceremony was delayed due to the pandemic and is set to air Sunday, April 25, on ABC. 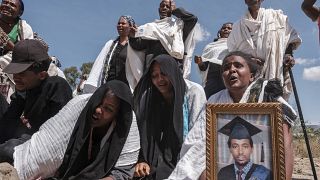