Surrounded by thousands of live scorpions in a laboratory deep in Egypt's Western Desert, Ahmed Abu al-Seoud carefully handles one of the curved-tailed arachnids before extracting a drop of its venom.

A mechanical engineer who worked in the oil sector for almost two decades, Abu al-Seoud decided in 2018 to strike a different path -- producing scorpion venom for pharmaceutical research purposes.

"I was surfing the internet and saw scorpion venom was one of the most expensive on the market," said the 44-year-old, clad in a white lab coat.

"So I thought to myself: Why not take advantage of this desert environment where they roam around?"

"Dozens of scorpion-derived bioactive molecules have been shown to possess promising pharmacological properties," said a review published last May in the journal Biomedicines.

It said labs are now studying its potential anti-microbial, immuno-suppressive and anti-cancer effects, among others, hoping to one day use or synthesise them for medicines.

Abu al-Seoud is from the Dakhla oasis, located in Egypt's vast New Valley province and around 800 kilometres (500 miles) southwest of the capital Cairo.

Sand dunes and towering palms surround his laboratory, which he affectionately calls the "Scorpion Kingdom".

"Here, every family has a story about a scorpion sting," Abu al-Seoud said.

To get the animals to secrete venom in the controlled conditions of the lab, the scorpions are given a slight electric shock.

"What matters is the level of purity," Abu al-Seoud said, adding that one gram requires the venom of 3,000-3,500 scorpions.

The liquid is refrigerated and transported to Cairo, where it is dried and packaged for sale as powder.

The laboratory "is certified (by the government) and has the ability to export this unique product", said 25-year-old Nahla Abdel-Hameed, a pharmacist who works at the centre.

Abdel-Hameed referred to some scientific studies that explored the healing benefits of the venom in curing certain diseases.

Mohey Hafez, a member of the pharmaceutical chamber at the Federation Of Egyptian Industries, was more cautious in his assessment of its current uses.

"Scorpion and snake venoms can be used in making antisera," he explained to AFP.

"There is no ready-made medication that entirely depends on the venom as a direct ingredient, but there has been promising research into its uses".

New Valley province boasts around five different species of scorpions, including the sought-after deathstalker (Leiurus quinquestriatus), whose venom sells for up to $7,500 per gram, according to Abu al-Seoud.

While he himself also catches the creatures, he employs residents of nearby villages for the risky activity, equipping them with gloves, tweezers, boots, UV lights -- and antivenom.

The scorpion hunters earn one to 1.5 Egyptian pounds (around six to 10 cents) per animal.

Pharmacist Abdel-Hameed said the arachnids are caught in residential areas so as not to harm "the ecological balance".

"I classify them according to the area where they were caught, the species and size," she said.

Her colleague Iman Abdel-Malik said that although the scorpions could go without eating for long periods, they were given "food and protein to increase the toxin excretion" comprised of cockroaches and worms twice a month in the summer, and less during the winter hibernation.

There are plans to breed the scorpions in the future rather than catching them, the veterinarian aged in her 20s added.

About 20,000 of the animals have been collected so far, according to business partner Alaa Sabaa, while the lab has a maximum capacity of 80,000.

He said the first scorpion venom extractions took place in December and January after two years of preparations, and yielded "three grams of venom".

The self-financed project has so far cost about five million pounds, or around $320,000, he said, and has also attracted government support.

While Egypt has been producing various types of venom for years, Abu al-Seoud said, it was often done illegally or was of poor quality.

He said he hoped his operation would one day be an antidote to the country's "bad reputation" in the sector.

"We are trying to show off the country's capabilities... through a high-quality product that has been studied scientifically as well as produced and exported legally," he said. 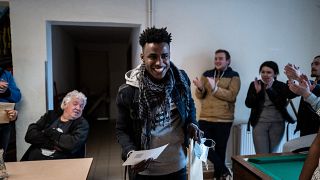