Police fired teargas in clashes with demonstrators in the capital Niamey on Tuesday and Wednesday, while in Dosso, 100 kilometres (60 miles) south of the city, the offices of a pro-government party were damaged by fire.

One of the two fatalities died of an epileptic fit during a protest, Alhada said.

The other, who was shot dead, was the bodyguard of politician Seini Oumarou, an unsuccessful candidate in the first round of voting on December 27 who had urged supporters to vote for Bazoum in the runoff, he said.

There was also "destruction of infrastructure, of public and private property," Alhada said.

Unknown assailants also attacked the home of a reporter in Niamey for Radio France Internationale (RFI), which is widely followed in Niger.

Journalist Moussa Kaka, who was unharmed in the attack, said assailants ransacked his home early Thursday, "breaking everything," and set fire to part of it.

Kaka, a veteran correspondent for RFI, spent 10 months in prison from 2007 to 2008 on charges of "endangering state security" over alleged ties with Tuareg rebels in northern Niger.

RFI's management issued a statement saying the attack on his home was "deliberate" because of his status as a journalist.

"This is a very serious attack on the freedom of the press," it said, vowing its "total support' for Kaka.

In a joint statement, the UN and the 15-nation regional bloc, the Economic Community of West African States, of which Niger is a member, firmly condemned acts of violence and urged "all parties to show restraint."

Two people in Niger have died in post-election violence and hundreds have been arrested, the government said Thursday, accusing a prominent opposition figure of stoking the unrest.

"The toll is two dead," Interior Minister Alkache Alhada said, reporting on violence that began on Tuesday after the results of a presidential runoff were announced.

Alhada told the press that 468 arrests had been made, "including certain politicians" whom he did not identify.

He accused a well-known opposition figure, Hama Amadou, of being "the main person responsible" for the unrest.

"(He) is being sought and as usual he is on the run, but we will find him," Alhada said.

Alhada said Amadou wanted to come to power by "setting fire" to Niger, accusing him of "murder, violence, unacceptable racist remarks and xenophobia".

Ousmane angrily disputed the result as fraudulent and claimed he narrowly won with 50.3 percent of the vote.

The elections have been trumpeted as a democratic watershed for the Sahel state -- the world's poorest nation according to the UN's benchmark of human development, and a country wrestling with two jihadist insurgencies.

President Mahamadou Issoufou is voluntarily stepping down after two five-year terms, paving the way for the first elected transition since independence from France in 1960.

Boureima is reputedly close to Amadou, by some standards Niger's most popular opposition figure.

A former prime minister and speaker of parliament, Amadou contested the presidency against Issoufou in 2016.

But he was forced to campaign from behind bars after being jailed on baby-trafficking charges, which he said were trumped-up.

His subsequent one-year conviction on those charges in 2017 were the grounds for banning him in the latest election, and he threw his support behind Ousmane.

Bazoum, 60, is a right-hand man to Issoufou, with whom he founded the ruling Nigerien Party for Democracy and Socialism (PNDS).

He picked up just over 39 percent of the vote in the first round.

Ousmane, 71, became Niger's first democratically-elected president in 1993, only to be toppled in a coup three years later.

This was his fifth attempt to regain power since then.

He won just under 17 percent on December 27 but gained pledges of support from a coalition of 18 opposition parties in the days before the runoff. 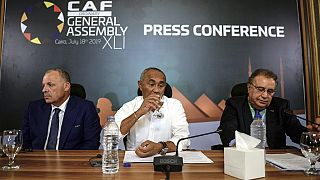