Her immediate goals are to ensure vaccines are produced and distributed worldwide, not just for rich nations, and to resist the push towards protectionism that worsened during the pandemic, so that free trade can help the economic recovery.

"I think the WTO is too important to allow it to be slowed down, paralyzed and moribund," she told AFP in an interview. "That's not right."

She will take over leadership on March 1 of an institution that has become weighed down and increasingly defanged, especially by the open hostility of Donald Trump's administration.

Amid the turmoil, including the US move that shutdown the dispute resolution court in December 2019 about complaints about handling of disputes with China, her predecessor stepped down last August, a year before his term was up.

Selected by the membership on Monday, after US President Joe Biden's administration backed her candidacy, Okonjo-Iweala promised to breathe fresh life into the trade body which she says has lost focus on helping improve living conditions for real people.

"I believe the WTO can contribute more strongly to a resolution of the Covid-19 pandemic by helping to improve access accessibility and affordability of vaccines to poor countries," she said.

"It's really in the self-interest of every country to see everyone vaccinated because you're not safe until everyone is safe."

Some countries, such as India and South Africa, have been pushing for a suspension of trade rules on patents to allow more rapid vaccine rollout.

But rather than get caught in another squabble among WTO members, Okonjo-Iweala said the organization could promote a quicker path.

"Instead of spending time arguing on those we should look at what the private sector is doing" with licensing agreements, to allow vaccines to be produced in multiple countries -- something she noted AstraZeneca already has done in India.

"The private sector has already looked for a solution because they want to be part of reaching poor countries and poor people," she said.

In addition, the WTO needs to work to ward off the trend towards export restrictions for medical devices and therapeutics, as well as the possibility of restrictions on the vaccines themselves.

While it is natural for politicians to help their own countries first, she warned that supply chains are tightly linked and cannot be quickly disentangled to create all-domestic production.

The MIT-trained economist, who served as Nigeria's first woman and longest serving finance minister, who also is a US citizen, is adamant the WTO must return to its original function of helping countries to deliver better living standards to their people.

"It's about creating employment, decent work for people. It's about ... improving lives," she said.

"There is definitely a role for trade to play in the recovery" from the Covid-19 economic crisis.

Even before the pandemic sparked a global recession, the organization had lost sight of that goal, she said, lamenting the example of the negotiations over a fisheries subsidies agreement that has dragged on for two decades.

"This cannot go on. We must bring it to a conclusion. We can't afford to fail on this."

The talks, which aim to end subsidies that lead to overfishing, failed to yield an agreement by the end-2020 deadline.

She blamed some of the calcification on the dominance of negotiators, which she called an "Achilles heel" of the WTO.

"Geneva is full of negotiating experts, but the problems have not been solved they've gotten worse," she said. "For them it's all about winning or not losing and so they stalemate each other."

The WTO needs "something entirely different" to turn things around, she said, rejecting criticism from some sectors that she lacks trade experience.

"You need strong political skills you need the ability to maneuver," she said, adding that she can serve as a bridge between developed and developing nations, pulling on her 25-year career at the World Bank as well.

She also intends to push to schedule the pandemic-delayed WTO ministerial meeting by the end of this year to start which will allow her to spark movement on critical issues.

Okonjo-Iweala will once again be the first woman in a key leadership role, taking over the WTO for a term that runs through August 31, 2025, but is renewable.

She agreed it was a challenging, thankless job, but said that make her even more passionate to show results, so that in future no one can question placing a woman in the role.

"That means I need people to support me even more. I need more cooperation," she said. 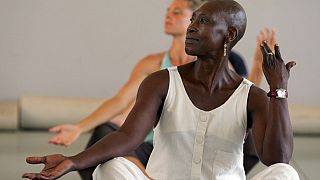