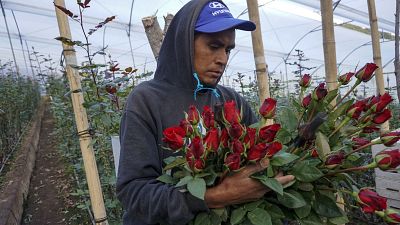 Frankie Leach is a politics and fashion writer living in London.

Two years ago I told my boyfriend that I didn’t want anything for Valentines’ Day.

“It’s just consumerism on steroids,” I said, “just cook me some dinner or something, I don’t need anything.” I felt vindicated, smug even. Here I was, in a happy relationship shunning Valentine’s Day because I was better than it. Better than mindless consumerism. Sticking it to the big man, and carving my own path.

And then, 24 hours before the big day, I panicked, “Maybe you could get me some flowers or something? You know, just so I have something on the day?” My boyfriend was furious and ended up spending about £50 on some floppy red roses from an online boutique - because I’d panicked. The flowers weren’t even nice. I hate red roses. The whole thing became an embarrassing disappointment.

Up until my wobble, I’d been completely convinced that I didn’t want anything on Valentine's Day. I was brought up to question the ‘Americanisation’ of holidays, and V Day was the one I’d grown to scorn the most.

Seeing couples with their big bouquets, tacky cards and expensive dinners every 14th of February made me want to throw up. And yet, 24 hours before crunchtime, I became suddenly terrified of the prospect of having nothing to show for my new relationship. I had been swung by a creeping desire to post a picture of my sagging bunch of Roses on Instagram captioned “surprise from this one”.

I wanted to compete.

The truth about Valentine’s Day

Because that’s what Valentine's Day does to you. In essence, it is a competition between couples and the rest of the world as to who can buy the most, receive the most and give the most. This is how, on the 14th of February, we measure love.

It is plastered everywhere, expensive jewellery made from diamonds mined by children, chocolates cooked from cocoa beans that are destroying the environment and roses that have been flown from far-flung countries and packed tightly in refrigerated boxes releasing god knows how much CO2 into the atmosphere.

Social media also fuels this torrid competition, with Instagram suddenly becoming the virtual version of Chelsea Flower show each year. It’s a contest as to who can show off the most, and score the most points for it.

There is a lot of societal pressure, particularly on men, to perform well on Valentine’s Day. It shows other women what they’re worth, and tees them up as good or bad boyfriends for the rest of the year. This is a symptom of straight relationships of course, but there is something icky about the way straight couples celebrate. It’s just hooked on consumerism.

But is there a way to enjoy Valentine's without pandering to consumerism and fuelling unsustainability? Of course there is. In these situations, there’s always the element of personal choice - and that’s what will help guide you through.

Despite being nature's gift to man, cut flowers are one of the most environmentally damaging products you can buy. Growing flowers on an industrial scale requires a lot of pesticides and other nasty agrochemicals.

Flowers are often grown and tended to by workers on very low wages, without proper protective clothing or healthcare to treat the impact of working so closely to such dangerous chemicals every day.

Just three weeks of flower delivery flights results in 360,000 metric tons of CO2 emissions. Then they’re transported in refrigerated trucks, which of course results in more CO2 to then be popped in plastic wrapping, and binned when they die.

Buying sustainable flowers can be tricky, especially as in February there’s not a lot in season for those of us living in the Northern Hemisphere. So, go to the experts and visit your local florist and see what they recommend.

Alternatively use Ethical Florist sites such as Arena Flowers, who are currently selling a Fair Trade bouquet of roses that are supporting Kenyan Rose farmers. Or check out our sustainable florists guide in London.

Oh chocolate, my own worst enemy. Sadly, also an environmental and societal enemy it transpires. Chocolate is one of the world’s biggest drivers of modern slavery.

Cocoa beans are grown near the equator, and mass production is contributing to deforestation of some key habits on earth.

Luckily for you, there are a few alternative options that you can choose, and you can also decide to make the shift onto sustainable chocolate for good. You’ll often find it’s tastier too! Like Tony’s Chocolonely, who are committed to making chocolate 100 per cent slave free.

The brand pays farmers a living wage that is relevant to the size of their farms and families and is made up of the “Tony’s premium” combined with the Fairtrade price.

Whatever you do, don’t buy new clothes

You don’t need it, you’ve got nowhere to wear them too and they were probably made in a sweatshop. Everyone likes to dress up on dates, and sometimes buying that new dress can make you feel a million dollars.

But clothes are the single largest contributor to unsustainability in the world, and it’s likely whatever you’re wearing will end up in a landfill because you don’t want to be an outfit repeater after you post that selfie on Instagram.

It takes just 2,720 litres of water to make on cotton t shirt and the UN estimates that globally, 80-90 per cent of wastewater is returned to the environment untreated.

If you’re desperate to wear something new, try buying second hand. Nine times out of ten you can find the dress you wanted to buy online, selling on a second-hand site like Depop or Ebay for a fraction of the price.

And remember, sustainability can and should be for life…not just for Valentine’s Day.